I've written about how Wall Street and the financial sector has worked to take your home by creating a legal property maze designed to extract wealth and, eventually, separate people from their homes. The key is slicing up mortgages (for securities) so that both the right to payments and ownership of the mortgage are lost in a property records nightmare that looks something like this ... 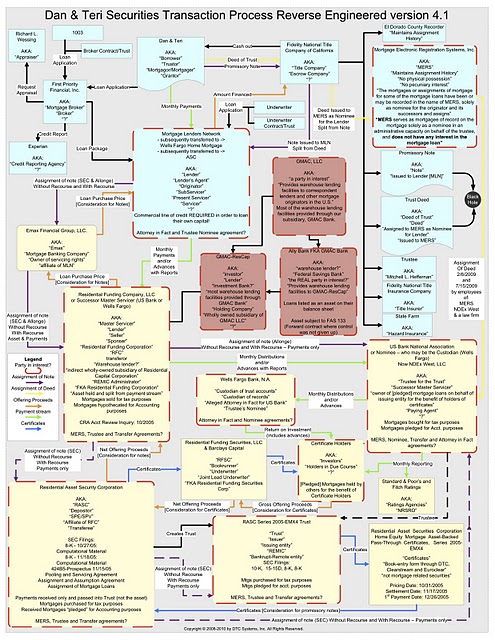 Now compare this with the old days, where most families held their mortgage and property records together. Everyone knew where the payments were going and who held legal title to the house. If you sold the house or refinanced you would have to go down to the county courthouse and physically change the record so that everyone could see clearly who owned the title and where the money was going. Pretty simple.

This is no longer case.

After slicing and dicing payments, and clouding legal ownership by shoving property titles into a shady recording monster called MERS, determining who has title to a house has become one of Wall Street's legal tools for extracting wealth without having to be responsible for what happens to the person paying the mortgage. As economist L. Randall Wray points out, because even the banksters don't have a clue who owes what it is so much easier to start foreclosure proceedings.

This helps explain, in part, the large number of illegal foreclosures and the lawsuits that are now being filed against the banks and the financial institutions. It also helps explain why the independent foreclosure review process was so skewed. Because the property title maze is such a mess federal regulators (and the Federal Reserve) have worked to deliberately minimize evidence of borrower harm. It doesn't matter if property rights - the backbone of American capitalism - are disappearing into a legal blackhole, or if people were illegally booted from their homes. As long as Wall Street and America's financial institutions are OK the rest of us are supposed to be OK too.