THE POLITICAL LESSON(S) OF THE BELL EXPERIMENT

The finger-pointing, scapegoating, jingoism and ideological aggression we're seeing during this presidential primary season is disheartening for many Americans. With so many problems confronting our nation I'm often asked why do politicians talk at each other instead of to each other? Why don't they take the time to understand and really discuss the challenges that confront us instead of trying to score political points by blaming each other? 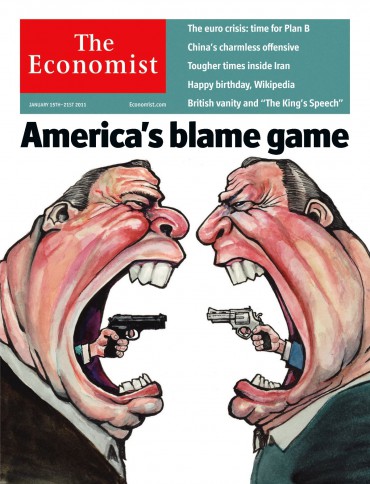 To help students understand what's happening, in my introduction to American Politics class I like to begin my discussion on American institutions by explaining why things don't get done the way many of us think they should ... i.e. with negotiation, compromise, civility, etc. Specifically I try to explain the roots of the ideological aggression and the bitter partisanship we see today.

To do so I discuss how our world has become so complex and fast paced that the vast majority of Americans are simply overwhelmed. The end result is that, in spite of living in the information age, large segments of American society have become disconnected and, ironically, uninformed citizens. Unfortunately, this leaves many susceptible to mindless bumper sticker answers to complex problems.

And, yes, it's happening on both the left and the right side of the political spectrum.

To deal with the complexity, increasingly many Americans are engaging in any number of "displacement activities." Displacement activities are viral forms of procrastination in that it involves doing something entirely disconnected to the task at hand. In the animal kingdom birds may peck at the grass instead of fleeing in the presence of a predator. Applied to the human condition it involves doing something to avoid confronting serious issues that everyone knows must be addressed. It becomes a lifestyle for many.

Among the displacement activities we see around us include mindless consumerism, reckless alcohol and drug use, self segregation through cultish or militia groups, the glorification of a mythical past, and the pursuit of superficial and self-indulgent relationships, among many other activities. Apathy, political tribalism, and faux movements are the result.

The worst of our displacement activities may be the return of religious fundamentalism because of how it helps absolve followers of responsibility for virtually anything. You don't have to listen to anyone because God's on your side. All you have to do is follow or elect the person who claims to be "Godly." Why learn anything if it's in God's hands and all you have to do is affirm what you already know? Lessons on tolerance and understanding are jumbled in the process. 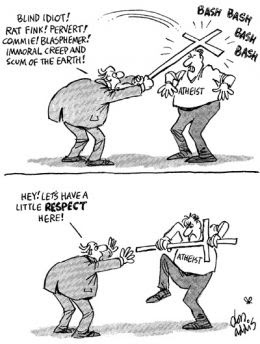 All of these displacement activities have created a disconnected society full of disorders and aggressive ideologues. This, unfortunately, undermines our democracy and social cohesion on many levels. Worse, as long as we're engaged in these activities, it helps keep many Americans from understanding or appreciating the activities that help to make our world a better place.

This is why this story about a man playing the violin on a cold January morning is so revealing. 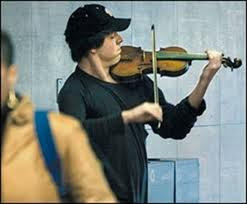 In 2007 a man played six classical Bach pieces for about 45 minutes. During that time, since it was rush hour, it was calculated that thousands of people went through the station, most of them on their way to work.

Three minutes went by and a middle aged man noticed there was musician playing. He slowed his pace and stopped for a few seconds and then hurried up to meet his schedule. A minute later, the violinist received his first dollar tip: a woman threw the money in the till and without stopping continued to walk.

A few minutes later, someone leaned against the wall to listen to him, but the man looked at his watch and started to walk again. Clearly he was late for work.

The one who paid the most attention was a 3 year old boy. His mother tagged him along, hurried but the kid stopped to look at the violinist.

Finally the mother pushed hard and the child continued to walk turning his head all the time. This action was repeated by several other children. All the parents, without exception, forced them to move on.

In the 45 minutes the musician played, only 6 people stopped and stayed for a while. About 20 gave him money but continued to walk their normal pace. He collected $32. When he finished playing and silence took over, no one noticed it. No one applauded, nor was there any recognition.

No one knew this but the violinist was Joshua Bell, one of the great violin players of the world. He played one of the most intricate pieces ever written,with a violin worth 3.5 million dollars.

Two days before his playing in the subway, Joshua Bell sold out at a theater in Boston and the seats averaged $100.

Joshua Bell playing incognito was organized by the Washington Post as part of a social experiment about perception, taste and priorities. But it also tells us how the pace of our lives can lead us to ignore excellence, truth, and even each other (you can read the Post's article on the experiment here). It tells us that we've conditioned ourselves not to care. The political implications abound.

The Bell experiment tells us that we're so wrapped up in trying to make our way through life that we don't have the time to stop and listen to one of the world's greatest musicians, playing the best music ever written. So how many other things are we missing? How many of us take the time to search for the truth instead of accepting empty slogans and embracing bankrupt ideologies?

There's a reason why many Americans embrace scapegoating, ideological aggression, and mindless single-issue politics. And it's not because the other side is necessarily evil. It's because it's easier to see them that way. It's easier to put ideology above the facts.

More to the point, it's easier to ignore the other side when we've convinced ourselves that they don't matter. The fact that we don't care is the political lesson of the Bell experiment.

It's sad that major news magazines know they will sell more copies in America if their covers are dumbed down for the average American.