This week Jose Bello, a student attending Bakersfield College, was on his way to work when he was picked up and detained by ICE. According to ICE, they were after his brother, who had been deported and had been in trouble with the law before. Since Jose was with his brother ICE decided to pick him up as well because he is also undocumented.


While the story made the local news because Jose Bello is both doing well at Bakersfield College, and has a job, ICE claimed Jose Bello was a gang member. ICE also asserted that Bello had a criminal conviction for violent offenses.

An interesting side note is that, instead of rallying around one of the community college's students - like the college administration did - one of Bakersfield College's faculty members decided to post the following on his FB page. 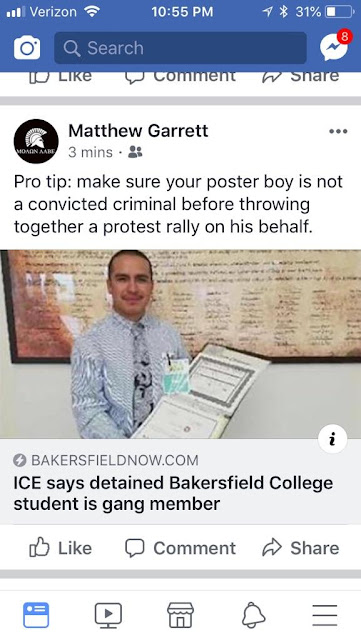 There's one problem with Matthew Garrett's post. As KGET 17 News reports, according to Kern County Superior Court's website records, "there is no criminal history for a 'Jose Bello' born in 1997, Jose's birth year ...". Also, while Bello's brother does appear to have a criminal record in Kern County, it's not for gang affiliations.

So I have a few "Pro Tips" of my own for Matthew Garrett.

PRO TIP #1: If you're going to jump to conclusions and immediately embrace slander against one of your students, try and make sure that the student isn't Latino, and one of the more than 65% of Latinos who make up your student body. Latinos will quickly figure out that you jump to conclusions, and want to believe the worst stereotypes about them.

PRO TIP #2: If you're going to throw one of your undocumented students under the bus because ICE throws out unsubstantiated claims about your student, try and make sure your head isn't shaved so that you look like you carry Tiki torches as a hobby, and hang out with shady nationalist types in your spare time.

PRO TIP #3: Even if you want to believe the worst stereotypes about your students, try and make sure your administration hasn't already made the commitment to stand by the student.

PRO TIP #4: If you're going to go after your undocumented students by believing what ICE tells you - in what is an obviously clumsy defensive PR move by ICE - try and make sure your advanced degree isn't from the same state (Arizona) that regularly profiles Mexicans. It kind of makes you look like you were pretty comfortable with the Mexican bashing status quo there.

I think I'll leave it at that, for now.

Addendum: In the FYI category, ICE does have a history of wrongly accusing detainees of having "gang" identities.