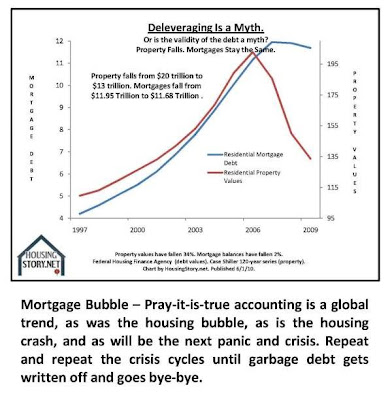 It shows us (red line) that housing values have fallen. But what's also true is that the amount of debt (blue line) tied to those homes have not collapsed, even with write-offs and renegotiations. There are a number of reasons for this. Among those include not enough homeowners qualifying for renegotiations and the fact that the biggest banks haven't had to mark down failing mortgage loans. This means our nation's financial institutions are carrying bad loans but they haven't been forced to mark them down to their actual market value.

And why should they?

When the market meltdown started in 2008 President Bush and Congress gave Wall Street and the banking industry a magnificent "deregulation" gift when they said financial institutions wouldn't have to mark down their toxic financial assets (and the instruments that they spawned). In essence they regulated market prices out of the market (by suspending mark-to-market accounting methods) and said to the banks, "You can attach any value you want to your toxic assets ... but don't worry, consumers and homeowners still have to abide by their contracts. If they don't, go ahead and attach fees and/or foreclose. Be happy."

Then we have President Obama's gift to Wall Street. His $75 billion Home Affordable Modification Program (HAMP) has turned into a significant market subsidy for the banks and Wall Street. This Huffington Post piece by Shahien Nasirpipour and Arthur Delaney helps explain why.

* REJECTIONS DOMINATE: Of the 1.2 million distressed homeowners who entered HAMP (through June) more than 529,000 have been kicked out (though 389,000 have benefitted from permanent modifications).

* FINANCIAL INSTITUTIONS FIRST: Banks are using a "Net Present Value" test. This allows financial institutions to determine whether a loan modification will make "investors"  more money than a foreclosure. Put another way, even after dumping trillions of taxpayer funded bailout dollars on to Wall Stree, the needs of banks and investors dominate a $75 billion program that was designed for homeowners.

* UNICORN MATH: Extending a loan modification process to distressed homeowners has only served to allow banks to carry bad loans on their books at full value, delaying loss recognition.

* HOMEOWNER FORECLOSURES, BUT NO PENALTIES FOR BANK NON-COMPLIANCE: Companies like Countrywide - the beneficiary of billions in taxpayer funded loans and guarantees - have told applicants that they aren't participating in HAMP. Foreclosures continue. Yet, the Treasury Department has yet to fine a single servicer for noncompliance with HAMP.

* BLOATED FINANCES: Delays have allowed banks to tack on tens of thousands of dollars in additional interest and other fees, which they use to inflate the value of the mortgage contracts they hold.

There's more, but you get the point.

While many market analysts will tell you that HAMP has helped achieve stability for the housing market, it has done little to nothing for the majority of distressed homeowners who've applied to the program. Worse, it shows that in spite of creating trillion dollar loans, transfers, and other guarantees for Wall Street - in the process, creating the biggest bailout in human history - individual homeowners were never supposed to be the primary beneficiaries. The biggest financial institutions on Wall Street were the targeted group.

But wait. It gets better (or is that worse?). Mortgage broker Michael David White explains why our housing problems pale in comparison to what's going on around the world. As bloated as our housing bubble economy got, it's not as bad as other parts of the western world ... 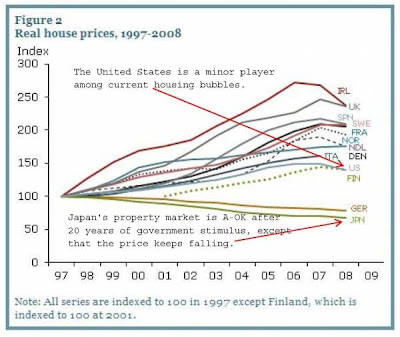 In a few words, many of the key western countries (except Germany and Japan) are looking down the barrel of gun when it comes to housing. Greece may have been the first salvo in a much wider market mess facing Europe, and the world.

Stay tuned. Things will be getting worse.