A great example of how out of control the far right has gone is this piece from Newsweek (hat tip to Candi). From "purity tests" to demands that political candidates comply with eight of the Republican party's 10 "Reaganite" principles, the modern GOP has demonstrated that they are highly intolerant of indepedent or creative thinking. This is an incredible demand given that their last guy almost wrecked the country trying to follow their Reagan principles.

Explaining "why every recent GOP president wasn't conservative enough for today's party" Andrew Romano walks us through some of the policies of the five most recent Republican Presidents. His conclusion? The current GOP and their Tea Party bachannalia have gone off the deep end (actually, that's my conclusion).

Below I've posted what Romano wrote about President Reagan who, by the way, scores only 4 out 10 on the Reagan scale. 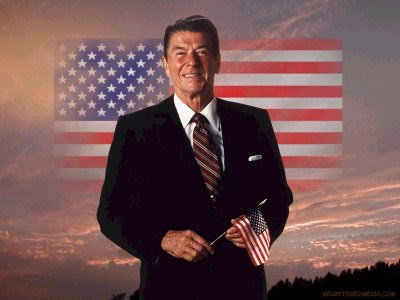 Fiscal Policy
The RNC based its purity test on Ronald Reagan's "principles"—chief among them a belief in "smaller government, smaller national debt, lower deficits, and lower taxes." But although the Gipper slashed taxes dramatically during his first year in office, the rest of his fiscal record directly violated the very rules the RNC created in his honor. During the Reagan years, federal employment grew by more than 60,000 (in contrast, government payrolls shrunk by 373,000 during Bill Clinton's presidency). The gap between the amount of money the federal government took in and the amount it spent nearly tripled. The national debt soared from $700 billion to $3 trillion, and the U.S. transformed from the world's largest international creditor to its largest debtor. After 1981, Reagan raised taxes nearly every year: 1982, 1983, 1984, and 1986. The 1983 payroll tax hike even helped fund Medicare and Social Security—or, in terms today's Tea Partiers might recognize, "government-run health care" and "socialism."

Domestic Policy
Were it enacted, the RNC's Ronald Reagan purity test would've also put Reagan in the crosshairs for a number of his signature domestic policies. "Oppose Obama-style government run health care"? As governor of California, Reagan nurtured and eventually expanded Medi-Cal, the nation's largest Medicaid program. Support "market-based energy reforms"? In California, Reagan established the Air Resources Board to intervene in the market and fight smog; as president, he signed more wilderness-protections laws than any president before or since. "Oppose amnesty for illegal immigrants"? In 1986, Reagan passed the Immigration Reform and Control Act, which eventually granted amnesty to 2.7 million illegal immigrants, and he continued to speak out for immigration rights after leaving office. Support "the right to keep and bear arms by opposing government restrictions on gun ownership"? Actually, Reagan was a staunch backer of the Brady Bill, urging Congress in 1991 to "enact it without further delay." To win the RNC's blessing, according to the purity test, a candidate would've had to support eight of 10 so-called Reaganite principles. But Reagan himself wouldn't have come close.

Foreign Policy
Foreign policy is where Reagan seems safest, at least at first glance. But despite his Cold Warrior bona fides, the Gipper still would've had a tough time pleasing today's conservatives. For starters, he refused to send more troops to the region when Hizbullah murdered 243 U.S. servicemen in Beirut in 1983, choosing instead to immediately withdraw the Marines remaining in Lebanon. Now, that would be a violation of the RNC resolution requiring candidates to back "military-recommended troop surges" in the Middle East. And in 1981, Reagan condemned Israel's preventive strike on an Iraqi nuclear reactor, which doesn't jibe with the RNC's demand to "[support] effective action to eliminate th[e] nuclear weapons threat" in North Korea and Iran. Sure, Reagan may have ended the Cold War and all. But would it have been enough to win the Iowa caucuses?

Social Views
Reagan was born in 1911, and his social views were largely in line with midcentury norms. But compared to other conservatives—especially the evangelicals who helped elect him and still dominate the GOP base—his record on social issues while in office was remarkably undogmatic, especially for his time. In 1967, he signed a law in California that legalized millions of abortions. In 1978, he opposed California's Proposition 6 ballot initiative, which would've barred gay men and women from working in public schools, and risked what his advisers predicted would be political suicide in taking to the airwaves to denounce it. Later, Reagan would become the first president to host an openly gay couple overnight at the White House. In 1981, he defied Jerry Falwell and other evangelical leaders by nominating Sandra Day O'Connor to the Supreme Court. A moderate, she would go on, along with one of Reagan's other nominees, Anthony Kennedy, to vote to uphold Roe v. Wade. As Peter Beinart has put it, "Turns out this Reagan guy wasn't really that Reaganite after all."