A PRIMER ON CEO PAY

If you want a primer on what's wrong with our nation's executive compensation system, this open letter from Yves Smith at nakedcapitalism.com is a good place to start. It focuses on the perverse incentives that encourage the Chief Executive Officers (CEOs) of America's largest financial firms to embark on reckless "heads I win, tails you lose" business strategies. 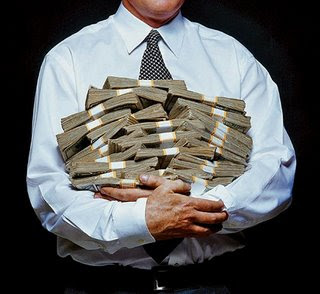 These reckless business models compel industry CEOs to focus on extracting rather than creating wealth. All of this is detrimental to both sound business decisions and the principles that surround market capitalism. Here's Yves' letter to Sheila Bair, Chairperson of the Federal Deposit Insurance Corporation. My synopsis and final comments are below.

America can no longer afford to have a banking system that serves the ends of its executives rather than those of taxpayers and communities who have been saddled with cost of reckless profit-seeking. The FDIC proposal to tie deposit insurance premiums to the incentives in executive compensation programs would be an important step forward towards making sure that bank managers operate in a way that reflects the value of the extensive government support and safety nets they enjoy. Bank officers should not be encouraged, as they are now, to take “heads I win, tails you lose” bets with deposits.

There is no question that the annual accounting/bonus cycle is badly out of line with the time horizon of many of the wagers that financial institutions take. Unfortunately, the belief that using stock options or restricted shares as an important part of compensation would lead to responsible behavior has proven wildly false. Both Bear Stearns and Lehman had substantial equity ownership at both the executive level and among the rank and file. By contrast, when Wall Street was dominated by private partnerships, so the management group was jointly and severally liable for losses, the sort of profligate risk-taking that took place in the run-up to the global financial crisis was virtually unheard of.

Unfortunately, all compensation arrangements at public companies are inherently, “heads I win, tails you lose.” No matter how badly a corporate team performs, its pay is immune from clawback, except in the case of fraudulent conveyance in bankruptcy, and even then, the “lookback” period is usually shortly before the failure of the firm. By contrast, it often takes years to reap the bitter harvest of bonus-flattering decisions.

It may be that the only way to cope with the agency problems inherent to risk-taking in a public firms is to make pay arrangements more symmetrical, as in to find ways to recover compensation from executives and senior business unit managers who managed and led programs and products that were ultimately destructive to their companies. The better the arrangements of the old private partnerships can be approximated (admittedly a tall order) the better.

In addition, I would encourage you to think hard about the perverse incentives posed by acquisitions. One of the striking developments in the US banking industry over the last 20 years is an increase in concentration, particularly among the largest players, which has played directly into our current “too big to fail” policy problem. The usual rationale given in greater efficiency, that is, that bigger banking is cheaper. Yet every academic study I am aware of has found the reverse: that once a minimum threshold is reached (there is some disagreement as to where that lies), banks in the US exhibit a slightly negative cost curve, which means the bigger the bank (measured in assets) the higher its cost ratios. Thus the dramatic expense cutting that occurs in the wake of acquisitions could have been done by each of the merged institutions, separately.

Another reason to be skeptical of bank acquisitions is the poor track record of mergers generally. Virtually every academic study ever done has found most mergers “fail” as in they deliver negative outcomes to stockholders.

So why do deals continue? First, there is a large constituency that promotes them because they are particularly lucrative, in particular, investments bankers (who collect M&A and financing fees) and management consultants. A host of other “helpers” such as lawyers and accountants also reaps fat fees from deals.

But the biggest incentive is again flawed executive compensation. Bank CEO pay is highly correlated with the size of the institution, measured by total assets. And the senior team of the acquired bank is effectively bought off via golden parachutes.

I strongly encourage the FDIC to remove the incentive for executives to bulk up their banks solely to pay themselves more. One way might be to require that executive bonuses be set in relationship to the pre-acquisition peer group for a substantial initial period (at least three years, better yet five) and be benchmarked against the new peer group of bigger banks only if the merged entity had met certain operational performance targets.

I also asked readers of my blog, Naked Capitalism, to offer their comments on the proposal that you, Vice Chairman Martin Gruenberg, and Thomas Curry are supporting. They are glad that the FDIC is serous about bank reform and are keen to see meaningful measures implemented to curb executive-serving, public-endangering compensation structures. I am attaching their remarks.

For those of you who aren't used to picking through the details, this is what Yves Smith is suggesting that Sheila Bair take a look at:

1. Excessive risk taking with short-term profit time horizons, and little to no liability for the CEO.

2. Paying CEOs with stock options that allow cash-outs with no loss price incentives, no matter how poorly the firm is doing.

3. No salary/bonus clawback provisions (like a retroactive tax) for executives who made short-term dumb decisions that collapsed firms after they left.

4. Unwarranted and inefficient mergers that benefit only a select few professionals at the top.

As one of the commentators added in the thread, it doesn't help that we have "zombie boards" made up of CEO friends and market sycophants, who also want the CEO to vote them big salaries on the boards they oversee. There's more to the story, but all of this is a good beginner's handbook for understanding what's wrong with Wall Street, and it's executive pay packages.