A while back I wrote that the economy wouldn't recover very quickly because the American consumer is simply "tapped out." The point I made is that Americans simply are carrying too much debt, while wages for the average family have virtually stagnated over the past 10 years.

With unemployment hovering around 9.5% and an economy on tax-payer funded (i.e. borrowed) life support, the recovery that we're seeing may be little more than debt-funded Potemkin Village. Making matters worse is that the trillions of borrowed dollars rolling their way through the economy is being gobbled up and hoarded by the financial institutions that got us into this mess. In a few words, we're living on borrowed time, hoping and praying that the financial elites who got us into this mess will be able fix things on their own - if we simply give them more money.

If you recall, back then Ronald Reagan told us that if we just put enough money into the hands of those with wealth that eventually they would do the right thing - because market players are rational - and the economy would soar. His plan? Give more tax cuts to the rich, and get government out of their way. 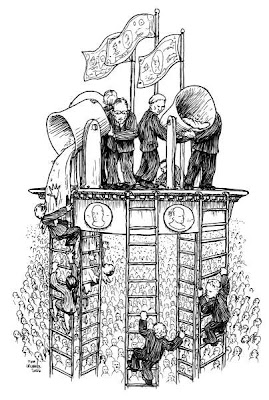 Our federal deficit almost tripled under Ronald Reagan, while his deregulation policies are primarily to blame for the deregulatory-induced mess we are now confronting. So much for market players acting rationally. If only someone would write a book about the myth of free markets ... Oh, yeah, I already did ;-)

In this article that discusses the potential for economic recovery ("The Rise and Fall of Artificial Wealth"), authors Michael D. Intriligator and R. Kyle Martin make it clear that not only are consumers tapped out, but that it will be a long time before a real recovery is on the horizon. Using an array of graphs and sound analysis, Intriligator and Martin tell us that President Obama - following in the Bush-Paulson footsteps - is simply putting money in the wrong hands. Here's what they have to say:

The problem with President Obama's approach to date is that he has been trying to fix the economic problems with a top-down approach. Obama has essentially continued the Bush - Paulson TARP approach, bailing out huge banks, insurance companies, brokerage houses and some major corporations. This approach is similar to President Reagan's "trickle down" economics that didn't work then and that is not working today.

If you want to understand why Reaganomics, or "trickle down," didn't work you can read my previous posts (like this one). If you want to see what trillions in taxpayer-funded bailouts is bringing us, check out these bank failure numbers. The point is - as Intriligator and Martin point out - we need to get more money into the hands of those who will spend it.

You may not agree with how Intriligator and Martin want to go about doing this (the focus is on homeowners and investors) but you have to consider their primary point: We're in the eye of the storm, and the only ones who have been given sound vessels to weather the storm are those who pushed the rest of us into the water.