It looks like the Federal Deposit Insurance Corporation (FDIC) - which is supposed to guard the bank deposits of people like you and me - is now guaranteeing new bank owners against losing money. How is this possible, you ask? In a few words, to entice buyers to purchase failing banks the FDIC is offering to cover around 80 percent of the losses associated with buying a troubled bank. Put another way, you and I are on the hook for up to 80% of a failing - but recently purchased - banks' losses in the future.

The Wall Street Journal is reporting that in a "loss-share" arrangement, the new owners of failed banks don't have to worry about future losses. Specifically:

To encourage banks to pick through the wreckage of their collapsed competitors, the Federal Deposit Insurance Corp. has agreed to assume most of the risk on $80 billion in loans and other assets. The agency expects it will eventually have to cover $14 billion in future losses on deals cut so far. The initiative amounts to a subsidy for dozens of hand-picked banks.

To date the FDIC has paid out $300 million under the loss-share agreements. This should be of concern because at the end of June the FDIC had just $10.4 billion in its deposit-insurance fund, down from more than $50 billion last year. With hundreds of banks on its "problem" bank list (click here or on the graph below for an interactive chart on bank failures) you can be sure that the FDIC will be looking toward the U.S. taxpayer to help out. 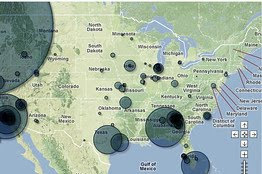 Can someone tell me, again, how the "free market" is supposed to work?

Email ThisBlogThis!Share to TwitterShare to FacebookShare to Pinterest
Labels: FDIC, Market Socialism, Market Subsidies, The Myth of the Free Market