RETURN OF THE DEBTOR'S PRISON 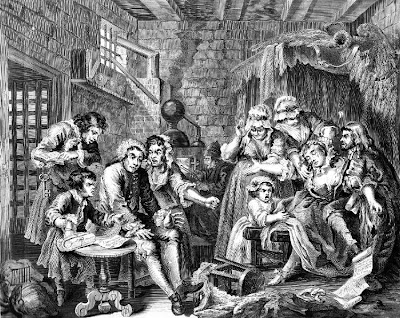 Wow, I thought the concept and punitive mentality that drove debtor's prisons were behind us. Not so, according to this NY Times editorial ...

Edwina Nowlin, a poor Michigan resident, was ordered to reimburse a juvenile detention center $104 a month for holding her 16-year-old son. When she explained to the court that she could not afford to pay, Ms. Nowlin was sent to prison. The American Civil Liberties Union of Michigan, which helped get her out last week after she spent 28 days behind bars, says it is seeing more people being sent to jail because they cannot make various court-ordered payments. That is both barbaric and unconstitutional.

Incredibly enough, it gets better.

In Georgia, poor people who cannot pay off fines — plus a monthly fee to the private company that collects the payments — are often sent to jail for nonpayment, according to Stephen Bright, president of the Southern Center for Human Rights. In 2006, the center sued on behalf of a woman who was locked up in Atlanta for eight months past her original sentence because she could not pay a $705 fine.

Yes, holding people in jail because they can't pay their debts is supposed to be unconstitutional (Art. I, Sec. 8: mandates "uniform Laws on the subject of Bankrupticies"). How we got to this point is a mystery to me. I know who I need to call to ask about this. I should have some informed commentary on this by Saturday.

P.S. The painting is A Rake's Progress. Click here to see the story.
Posted by Mark A. Martinez at 8:43 PM

Email ThisBlogThis!Share to TwitterShare to FacebookShare to Pinterest
Labels: Debt in America, Laws of Justice, Race and Politics