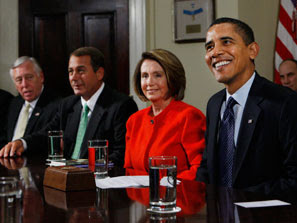 It turns out that when the republicans heard "bi-partisan" from Barack Obama they thought that meant their failed tax cuts for the rich policies were back on the table, and that they could push Obama on some social issues too. And why not? Our democratic leaders have always caved in to republican threats in the past, especially when it came to national security. Here's what happened:

President Obama listened to Republican gripes about his stimulus package during a meeting with congressional leaders Friday morning - but he also left no doubt about who's in charge of these negotiations. "I won," Obama noted matter-of-factly, according to sources familiar with the conversation.

Like I said in a previous post, it's time for the republicans to take their failed ideas and sit on the bench for a few years.

Republicans will get their chance to try and blame Obama and the democrats for Bush's mess - and they will in a year and a half. However, what they don't understand is that, as Obama noted in his inauguration speech, the earth has moved under their feet. Their ideas on markets and governing have failed. America understands this, and understand that President Obama gets it.