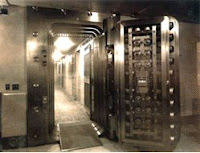 In last Saturday's program I commented on the CSU Bakersfield Commencement Address given by former Congressman Bill Thomas. In his address Bill Thomas discussed social security and the problems that loom for today's graduates. He said little about his role in escorting President Bush's budget busting policies through congress, nor offered any solutions. Classic.

As promised, here's an op-ed I wrote on the topic from three years ago as it appeared in the Bakersfield Californian March 27, 2005. And, yes, it offers several very common sense solutions. I'll be sure to discuss some of these on tomorrow's program.

Arguing that social security will go broke by 2018 President Bush says that there’s no trust fund because we’ve already spent the money you and I pay in payroll taxes. To solve the problem the president is offering privatized investment funds to build financial nest eggs we can use in retirement. Fair enough. The problem, however, is that to make his point the president is deceiving America.

To make his argument work, the president needs you to believe that the social security trust fund is insolvent. The only way it becomes insolvent is if the federal government says it will not honor its obligations. Let’s start from the beginning.

In 1983 Ronald Reagan appointed a commission that recommended collecting an additional 2% in payroll taxes to keep social security steady. The result was higher taxes on the middle class, but an additional $1.2 trillion in government revenue since 1983. The government can do many things with this money but chose to purchase government bonds held in trust by the federal government. Hence, the social security trust fund.

Since the signing of the constitution (Art. VI) every purchaser of U.S. sanctioned treasury notes has been able to bank on the promise that they will be repaid (with interest) by the federal government. The only way for this not to happen is for Washington to say we will not meet our obligations.

This is where President Bush’s deception of America comes into play.

The president and his advisors maintain that the $1.2 trillion accumulated in the trust fund (in the form of government bonds) does not constitute a real asset. Imagine what you’d say if your financial advisor told you the government bonds in your investment portfolio aren’t worth anything because “they’re just IOUs and don’t constitute real wealth.” This is precisely what the president is asking all Americans to accept with the social security trust fund.

More specifically, he’s telling every bond holder that America no longer has a fiduciary or moral obligation to pay its debts. This position might be OK if you’re a Banana Republic, or a third rate tyrant, but the United States of America?

There are several schools of thought why the president is pushing America toward third world financial practices. First, many believe President Bush simply cannot tolerate successful government programs, and views privatization as a way to destroy social security and undermine FDR’s New Deal legacy. To do this – as was the case with going into Iraq – the president needs the economic equivalent of a threatened “mushroom cloud” to scare America. Hence, the bankrupt trust fund story. Second, it’s argued that the Bush Administration is so incompetent they simply don’t understand the implications of undermining social security. I have a hint: Look at the condition of America’s elderly in the 1930s. Third, the Bush administration is simply doing the bidding of Wall Street, who want trillions of new investment dollars to accelerate profit levels.

Whatever your poison – I think it’s a combination of all three – one thing is certain: social security is not in trouble. However, for the sake of argument, let’s assume we’re in a time machine (or wherever George Bush does his thinking), and we’re in the year 2018. What should be done? Here’s my plan.

First, let’s start by rescinding Bush’s tax cuts for the rich. This would add approximately $1.8 trillion to government coffers over the next ten years. This is responsible for three reasons. One, we can use the money to buy out the trust fund the president says will be broke by 2018. Also by “saving” the trust fund we won’t have to borrow the $2-4 trillion necessary to make the transition toward privatized accounts. Finally, because America’s middle-class overpaid payroll taxes for more than 20 years, the surplus initially used by President Bush to justify tax cuts for the rich (“It’s your money”) wasn’t really theirs to return in the first place. With no surplus, the justification for tax cuts for the rich simply makes no sense (and spare me the “tax cut-job creation” lie).

Second, why don’t we raise the cap on payroll taxes? Today, all income above $90,000 is exempt from the payroll tax, which releases approximately 15% of all income from the social security tax. This contrasts with twenty years ago when only 10% of national income was exempted by the cap. This imbalance needs to be addressed, and could be with a new ceiling at, say, $200,000.

Finally, we could discuss raising the eligibility requirements, or reduce social security cost of living increases (COLAs) by one-half percent per year? And privatization? I’m not opposed to private accounts (I have a couple of my own), but if you have to borrow $2-4 trillion to fund the transition, and still cut future benefits, it’s not worth it.

In the end, the case for crisis and privatization is disingenuous, damages America’s long-term credibility, and undermines our future. The fact that the president doesn’t understand this should be cause for worry.