From the NY Times ... A letter Albert Einstein wrote to philosopher Eric Gutkind in 1954 just sold for $404,000. In the letter Einstein described the Bible as “pretty childish” and scoffed at the notion that the Jews could be the “chosen people.” 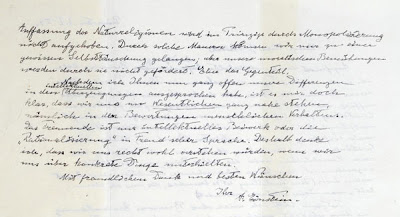 This should help settle the issue for those who enjoy sending that annoying "Evil is the absence of God" chain-letter. The chain-letter is usually sent by true believers who (1) want to revel in the humiliation of an atheist teacher by Einstein when he was a schoolboy (which hardly seems Christian to me), or (2) seek to use Albert Einstein as a foundational source for Intelligent Design, which requires a stretch of imagination (like what you are asked to believe if you visit the Creationist Museum in Kentucky).

But, alas, the appearance of this letter probably won't settle anything. Evidence is a hard thing to accept when you're used to making things up.

P.S. It should be noted that Einstein was an agnostic, and not an atheist. There's a difference. He believed that any understanding of God “is too vast for our limited minds.”
Posted by Mark A. Martinez at 9:56 AM