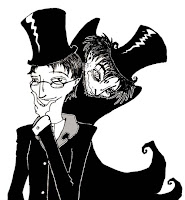 After posting “Bubbles Greenspan” I started thinking about the larger impact that Alan Greenspan’s monetary policies will have on our nation. This is what I’ve come up with so far.

MR. HYDE … In my post I suggested that Greenspan’s policies largely went by the book and complimented deregulation by making money readily available in measured amounts. This helped satisfy America’s financial needs during the Reagan-Bush I years. With the arrival of Bill Clinton and his deficit reduction policies (i.e. tax hikes and budget cuts) Greenspan promised and delivered Fed policies that helped produce economic growth and healthy surpluses. In the process he helped show that the Fed is not so apolitical, and that entrepreneurs don’t wait around for the marginal tax rate to fall in order to work hard and/or have a good idea. So far so good.

DR. JEKYLL … But then George Bush entered the White House in 2001. Greenspan proceeded to undermine what good his policies may have done by foolishly supporting a massive transfer of wealth (budget surpluses) to America’s financial elites through Bush’s ill-targeted tax cuts. What good had been produced by careful economic policies and monetary prudence was wiped out by Greenspan’s imprudent trust in the reckless policies of Born Again supply-side economics. In the process, he helped insure that the national debt would not be paid down, nor would investments in infrastructures be made (Louisiana and Minnesota show what happens when infrastructures are ignored). In the process Greenspan showed himself to be a political hack of the first order. 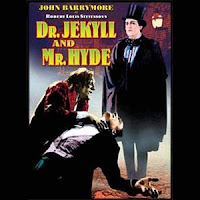 DR. JEKYLL ON STEROIDS … It seems to me, the real threat lies in what lurks around the corner. After taking a look at economist J. Bradford De Long’s article on America’s inflationary 1970s something else became clear about Greenspan's tenure. De Long argues convincingly that while OPEC's oil price hikes in the 1970s may have energized inflationary pressures, they only exacerbated what was already a bad situation. Simply put dollar policies and U.S. spending from the 1950s and 1960s had already planted the seeds of inflation. Inflation was going to happen one way or the other in the U.S. after the 1960s. This is what makes the past 28 years so important, and Greenspan’s political hackery so much worse than one might think.

Since 1981 we have added $8.1 trillion to our national debt. We borrow recklessly and run record budget deficits year after year, as if tomorrow will never come. Still, the only time Greenspan saw fit to do his job and guard the integrity of the dollar – which is the only real goal of any central banker – was when Bill Clinton came to office. It was then that he made deficits his primary concern. And if Greenspan’s own account of events are true, he not only got religion suddenly, but he played a pretty good game of political extortion with Bill Clinton.

So why the change of heart when President Bush came to office? While we can debate the answer to this question, there's little doubt that Greenspan’s tenure will be marred by the fact that he allowed one Republican administration after another to wander aimlessly in his monetary forest. Today, as was the case in the early 1970s, the American economy has become primed for inflation.

With the jobs protecting "Shadow of the Depression" gone (which Brad De Long explains), and with deregulated Globalization on the march, there is little to inhibit policymakers from going after workers and wages when the scourge of inflation rears its ugly head. Nice.