A very long time ago, when I thought I was going to become a fireman, I enrolled in Cabrillo College's Fire Science program. I also got a summer job at IBM's Santa Theresa facility outside of San Jose with their security team (a job that had me filling and changing out fire extinguishers, and working the guard booth on some weekends).

As part of my fire training I later signed up for what was then called California's "Blue Card" crew.

The Blue Card crew (I'm not sure what it's called today) was a part-time group of fire fighting specialists who train to go into ground and forest fires. These are the guys you see assisting the California Department of Forestry and other professional fire fighting groups during the summer. It's hard and dangerous work, and requires a good deal of stamina. I was 19 years-old at the time. You can get called out to fight over an entire summer, or just a few times, depending on the summer's fire activities.

It was a fun experience. At 19 everything that's dangerous is fun. But I only went out on a forest fire once. We fought the fire for a week, so I have some interesting and fun stories. But I'll be the first to say that my associates degree in Fire Science, and my experience at IBM and with the Blue Card crew doesn't make me a fireman; or even a fire professional.

I'm writing about this because over the weekend the CEO of the Bakersfield Californian, Bob Price, wrote about a local race for judge here in Kern County. 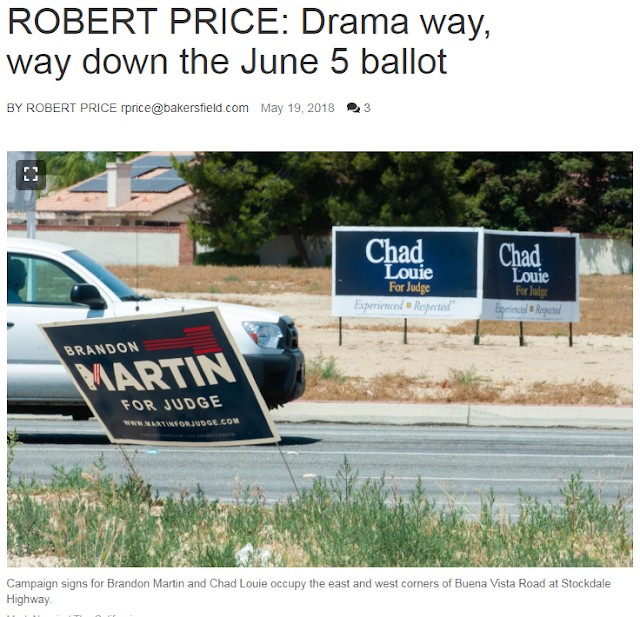 In a nutshell, Bob Price is pointing out that Brandon Martin - son of respected local attorney, George Martin - is using his one hour and 18 minutes as an acting "judge pro tem" to claim in his campaign candidate statement that he, in effect, is a seasoned judge.

The problem with making this claim is that it clearly states in the California Judges Association "ethics in judicial elections" guidelines that while you can make reference to your service - even if it's just for 1 hour and 18 minutes - that you "may not" refer to yourself as a judge. Here, check it out ...

Here's the rub. As Deputy District Attorney Michael Caves pointed out, Brandon Martin served as a judge pro tem - for 1 hour and 18 minutes - on the same day that he filed to run for the superior court of Kern County. More to the point, he listed "Judge Pro Tempore" as his third occupation in his candidate's statement.

I mean, at least I spent a week fighting a real fire, which is considerably longer than 1 hour and 18 minutes of being an acting judge.

Then we have some of the campaign literature (below) coming from Brandon Martin's team. He's listed as a both a "Republican" and a Judge Pro Tempore. In California political races for judge are supposed to be non-partisan, meaning you're not supposed to reference party affiliations. As for Martin's "Integrity & Experience" claim, all I'm going to do is restate the guideline that temporary judges "may not refer to themselves as judges" let alone claim to be a "judge pro tempore." 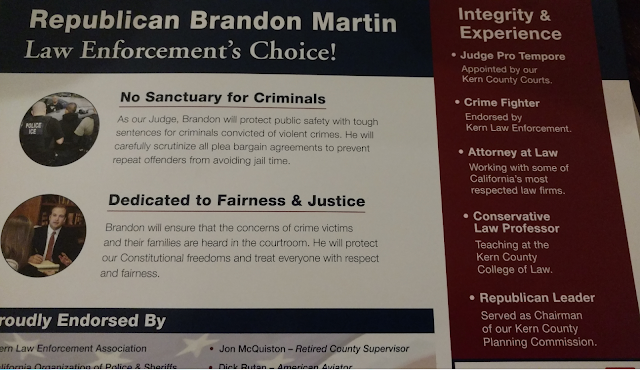 There's more, but my suggestion is that if you live in Kern County and have any questions about the superior court judge's race involving Chad Louie and Brandon Martin you should read the Bakersfield Californian's piece by Bob Price.

If you want something a bit deeper you can read Michael Caves' Linkedin piece, "Morally Bankrupt: Brandon Martin's candidacy is an insult to the Kern County Superior Court." Mr. Caves does the Kern County legal community a real service with this piece, especially since so many don't want to stick their necks out and offend George Martin, a real attorney with real legal experience.

(You should also know that Brandon Martin, who is seeking a term as a trial judge, has absolutely no trial experience.)

There's more, but I'm just going to end by saying I'm voting for Chad Louie for Kern County Superior Court judge, and encourage anyone living in Kern County to do the same.