According to the NY Times, Trump "lashed out" in "an extraordinarily angry response." He even accused his own Justice Department of breaking in to Michael Cohen's office.

Let's keep in mind that the warrant was signed off by U.S. Attorney Geoffrey Berman, who is not only a Republican but is on record donating to Trump's campaign. He was also appointed to his current post by Donald Trump. 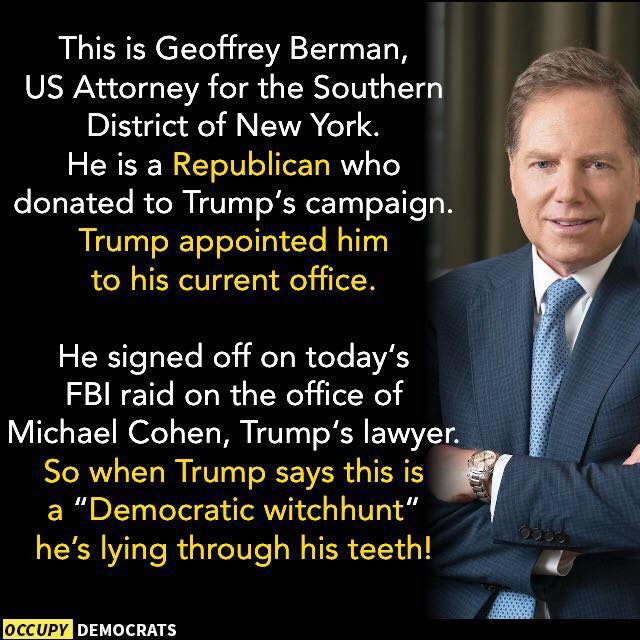 To help us understand what's behind the warrant, defense attorney and retired JAG office (Marine Corps), David Torres offered a few comments on his FB page that helps explain what's happening. I've synopsized and put into bullet points some of the key points below.

* The search warrant (SW) was signed by a Judge in the Southern District of New York.

* The US Attorney who prepared the affidavit for the SW was appointed by DJT. The Special Prosecutor is a Republican. His boss, Rod J. Rosenstein, is also a Republican.

* Before a SW can be executed, the person seeking the SW - the US Attorney for the NY District - must prepare a thorough affidavit of probable cause stating with specificity the items of evidence they expect to locate at a certain location.

* The investigating officer has to state under the penalty of perjury how they obtained the information and support the information with evidence and/or statements. The judge must believe the affidavit contains sufficient probable cause to support the warrant before signing it.

What the above means in simple terms - as David Torres so eloquently puts it - when Donald Trump "says the FBI 'broke into' his lawyers office, that’s a lie." The FBI had the right and, I might add, the duty to pursue the evidence that they have been presented with. The FBI investigates criminal matters, a process which even the president of the United States is not above. This means, as Mr. Torres points out, everything the FBI did when it executed the SW "was done by the book."

Simply put, as much as Donald Trump's supporters want to continue supporting him and his crazed interpretation of law, Trump does not live under another set of rules. 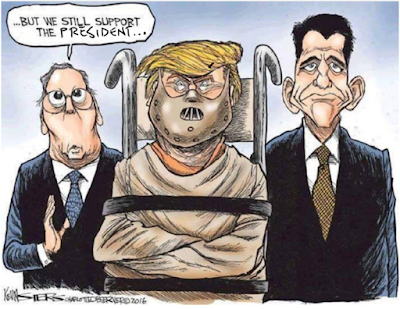 David Torres points out several additional matters of protocol we should understand about the SW process.

* Whenever a SW is effected at a law firm, a “Special Master” is appointed by a judge to insure the Attorney-Client privilege of other clientele is protected and their files are not reviewed.

* While defense attorneys have the right to attack the affidavit of probable cause, the attack on the SW is reserved for attorneys in a court of law before a federal judge.

* More importantly, attacking an affidavit of probable cause is NOT the prerogative of the president of the United States, especially when the only goal is to besmirch the reputation of the FBI and the legal process.

A couple of additional points we want to keep in mind here include:

* Donald Trump made his comments in front of our nation's military leaders. The message on separation of powers and institutional integrity was clear: Trump respects neither.

* Geoffrey Berman was a law partner of Rudy Giuliani's, former mayor of New York and an early supporter of Donald Trump.