GOLDMAN SACHS ADMITS IT DEFRAUDED INVESTORS ... GETS THE FUNCTIONAL EQUIVALENT OF A TIME OUT

So Goldman Sachs has finally admitted that it defrauded investors by selling toxic financial products before the financial crisis in 2008. But they only have to pay what amounts to a pittance compared to what they actually hauled in from the fraud ... To sum up, this is what happened.

Banking giant Goldman Sachs has just admitted that it ripped off both consumers and taxpayers for at least $69 billion dollars.* But rather than doing jail time they only have to pay a $5.1 billion fine.

So, yeah, Goldman Sachs effectively got a time out; and, no doubt, a serious finger wagging.

Now for the double standard.

Imagine that you walk into a bank. You rob it and walk out with $690,000 (you'll need one brief case for that). We all know that you will get some serious time in the Big House if you get caught. When this happens you don't get to stall and negotiate. Blue collar crime, after all, is treated differently.

You also don't get to admit wrongdoing, pay a paltry $50,000 fine, and then walk off into the sunset to enjoy the rest of your ill-gotten gains. You're going to jail. The white collar criminals at Goldman Sachs got bonuses.

But this isn't the end of it.

Goldman Sachs will probably write off a good chunk of the $5.1 billion fine at tax time (as a business expense), which means that the American taxpayer will end up paying part of their fine. Nice. That is, if you're Goldman Sachs. 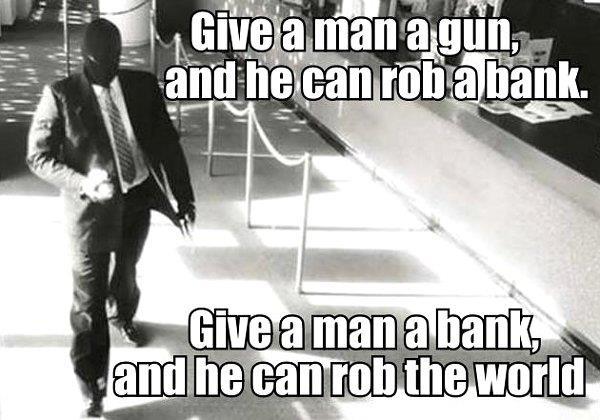 Query: How many of you would start robbing banks if you knew that if you got caught that you would only have to pay about 7 percent of the ill-gotten gains back? Be honest ...

Is it any wonder that Wall Street is setting us up for another market collapse? While they may be immoral or unethical, they aren't dummies.

* $69 billion represents what Goldman Sachs officially borrowed from the government to keep their head above water during and after 2008 (their financial lifeline is actually more than $69 billion; much more). They secured these loans by - wait for it - using the same toxic and worthless financial crap Goldman Sachs created as collateral. It's kind of like burning down a house for the insurance money and then putting up the same house you just burned down as collateral for a loan - a loan that the bank cluelessly approves.