WE'RE DOOMED ... HOW "QE ETERNITY" IS GOING TO SUCK OUR NATION DRY

The president of the Federal Reserve bank of Richmond, Jeffrey Lacker, is not happy with the government backed guarantees granted to the Too Big To Fail banks. And he's not just talking about the seemingly endless bailouts that have come in the form of trillion dollar money dumps from the Fed's Quantitative Easing (QE) programs. He's concerned about the multi-trillion dollar financial guarantees that will kick in when the next financial meltdown occurs.

The best part of Lacker's concerns over the guarantees is that he's speaking very publicly about it. Zero Hedge provides a synopsis. See if you can spot the problem area ...

In its 2013 estimate, using 2011 data, the Richmond Fed found that there were $44.5 trillion in total liabilities in the financial system, such as bank deposits and bonds. Of them, $10.6 trillion (23.8%) carried explicit guarantees, such as FDIC deposit insurance. And a stunning $14.83 trillion (33.4%) carried implicit guarantees [my bold; OK, so I'm helping]. Unlike FDIC insurance, these guarantees are issued for free to the beneficiary, and when they come due during a bailout, all Americans are forced to pay, through either government or Fed action, to protect the wealth of the creditors. These implicit guarantees in 2011 amounted to 97% of GDP!


You read that right. The more than $4 trillion in bailout cash that the government has already handed over to Wall Street and the banks (which you and I backstopped) wasn't enough. We're now on the hook for more than $14 trillion should (when) Wall Streets biggest financial institutions and the banks collapse our economic system.

Let's call it "QE Eternity" because, at the end of the day, the more than $14 trillion in Fed guarantees is Wall Street's insurance program for their next rainy day. And best of all, Wall Street doesn't have to pay a dime for the insurance program. You and I just get stuck with the tab when the market collapses. 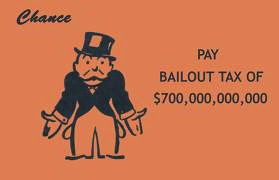 So, yeah, Wall Street's on-going market bets have sucked the U.S. economy and the U.S. taxpayer into their Black Hole of market stupidity, again. Only this time there won't be any real debate about the bailout program. It's already guaranteed.

If there is any silver lining here it's the fact that Jeffrey Lacker is talking about the nonsense.

You can read Jeffrey Lacker's comments on the issue here. Or you can read Zero Hedges review of his comments here.