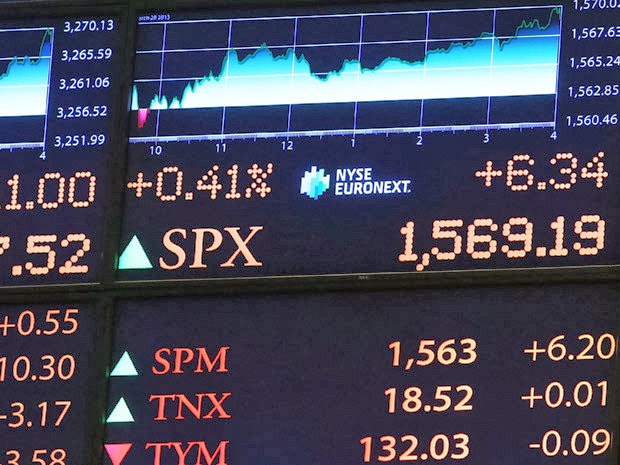 This is getting ridiculous ...

If you follow this blog you might think that I sound like a broken record with this post. But it needs to be said, and repeated over and over until we all understand one thing: No one should be jumping for joy over the S&P and the Dow hitting new highs because the record is artificial and based on taxpayer-backed money dumps.

The correlation between S&P and the Dow hitting new market highs because of (and only because of) government interventions should be pretty clear. Check it out. 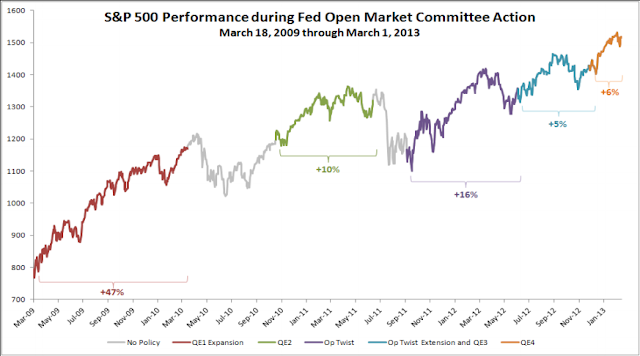 See the correlation? To be sure, as I've been pointing out before, regular bailouts and favorable legislation are helping pump up the market too. But the money dumps from the Fed seem to be what's putting the market into over drive.

If you're wondering what this means let's make this real simple. Our markets are not healthy. They are dependent on artificial stimulants - Fed money dumps, legislative favors, and bailouts - for their success.

I'll go one step further. We don't have a functioning free market economy.

Wall Street and today's financial market players (they're not entrepreneurs) are successful only because of taxpayer backed money dumps from the Federal Reserve. The people tied to Wall Street who have seen their wealth increase over the past 5 years are actually beneficiaries of tax payer backed state interventions (which helps to explain why there should be a Tobin Tax on market transactions).

If we're being blunt, it's even simpler. Market players in the financial sector today are wards of the state.

So, how much money has the Federal Reserve been pumping into the system, you ask? Oh, about $5 trillion ... 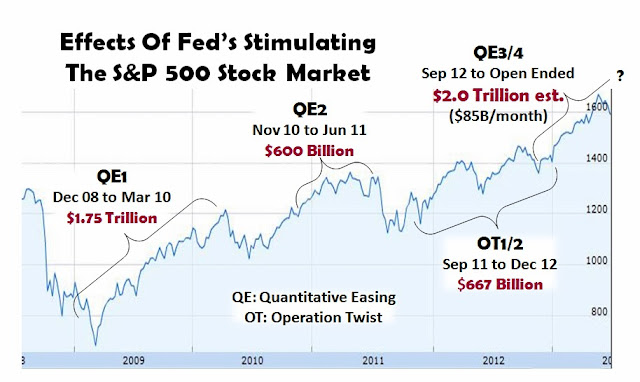 So you might be asking your self, How come I haven't heard of these massive money dumps? Good question. The answer is real simple. Market players and the Federal Reserve have decided to call this massive taxpayer-backed transfer of money into our markets "Quantitative Easing" instead of what it really is, corporate welfare. People who might be inclined to listen to someone talking about trillions of dollars spent on corporate welfare tend to tune out when they hear "quantitative easing" in conjunction with "Federal Reserve" and "the economy".

But quantitative easing (QE) - or corporate welfare - is actually quite easy to understand. It's the Federal Reserve transferring incredibly cheap taxpayer-backed money to the private banking sector. That's it.

In theory this is how corporate welfare QE should flow through the economy ... 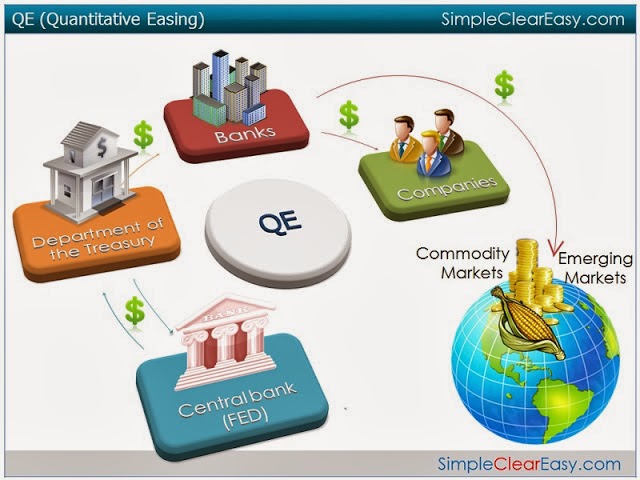 Banks are supposed to get the money transferred from the Federal Reserve and then make this money available to both private companies and to people like you and me. But they're not doing this.

The reality is banks are hoarding money.

Today the banks have more deposits on hand than loans outstanding and - though they purchase U.S. Treasury notes - they are effectively sitting on money lent to them by the Federal Reserve. They're able to do this because the federal government's financial guarantees have enabled the biggest banks in America to continue making money while operating selfishly and recklessly.

Unfortunately, rather than circulating the cheap money they get from the Federal Reserve into the economy the banks appear to be sitting on it for their next rainy day. The fact that America's largest financial institutions are preparing for it should be a warning for us all.

Could the "rainy day" be a deflationary cycle?

If so the biggest banks could be poised to exercise tremendous power.