A DISTINCTION WITHOUT A DIFFERENCE ...

Less than 10 days after our GOP-led Senate voted to acquit Donald Trump it appears campaign cash and legislative gifts were handed out to Republican Senators who sided with Trump. Is this bribery or a quid pro quo? You make the call ... though, to be clear, in Trumpland it's probably a distinction without a difference. 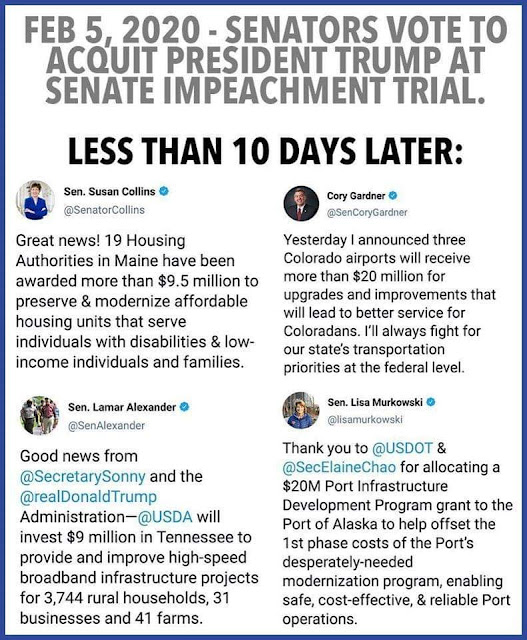 This is how my friend Wesley Virgin's story starts in this SHOCKING and controversial video.

You see, Wesley was in the military-and soon after leaving-he unveiled hidden, "SELF MIND CONTROL" secrets that the CIA and others used to get whatever they want.

THESE are the EXACT same tactics lots of famous people (notably those who "come out of nothing") and the greatest business people used to become wealthy and successful.

You've heard that you only use 10% of your brain.

That's mostly because the majority of your brainpower is UNTAPPED.

Maybe that thought has even occurred INSIDE OF YOUR own mind... as it did in my good friend Wesley Virgin's mind about seven years ago, while riding an unregistered, beat-up garbage bucket of a car without a driver's license and with $3.20 on his debit card.

"I'm so fed up with living paycheck to paycheck! Why can't I become successful?"

You've taken part in those types of conversations, right?

Your success story is going to start. You just need to take a leap of faith in YOURSELF.

CLICK HERE To Find Out How To Become A MILLIONAIRE