Recently in my American Politics 101 class we discussed why Congress has such a difficult time getting the work of the people done. As part of a larger lecture I discussed how many members of Congress are simply overwhelmed and uninformed (both parties) by a society that is both fast paced and highly complex.

These dynamics compel Congress to rely on polls and experts, who may provide information and advise, but do little to connect individual members to their communities. It also only explains a small part of a larger environment.

It doesn't address the structure or process of Congress. And it certainly doesn't explain why Congress has been ignoring the will of the people. 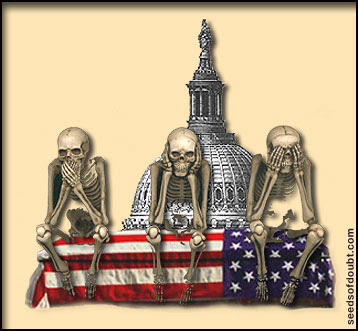 WHAT'S (NOT) HAPPENING
Think about it. The vast majority of Americans want Congress to do something on the jobs front, with background checks, poverty, subsidies for big oil, the Buffet Rule (establishing a minimum tax rate on those making a million per year), and a host of other issues. Congress has refused to act. And it's not just our current Congress.

The vast majority of Americans were opposed to helping Wall Street and the banksters after the market crashed in 2008. Did Congress listen? Hell no. Wall Street ended up with access to seemingly endless Federal Reserve funds. To date they are the recipients of a bailout bonanza that's seen $4 trillion transferred into their accounts, with another $16 trillion backstopped by the American taxpayer.

Why does Congress refuse to represent the will of the people? Part of the reason is that Congress has a tendency to ignore those on the bottom of our nation's economic ladder, while appeasing those with the resources who can help them get re-elected (a topic for another day). Another issue is that while members of parliaments in other countries represent between 90-120,000 citizens each member in the U.S. House of Representatives must serve about 700,000 people in their district (it was once 40-50,000).

Clearly, something is wrong with both of these developments.

The issue, however, is not that Congress has decided to ignore the poor, or that they can't find the time to talk to 700,000 people. The real issue is how population shifts and redistricting games have turned our U.S. Congress - both the Senate and the House of Representatives - into un-representative bodies.

DEMOGRAPHIC SHIFTS / GERRYMANDERED RESULTS
Consider the following. The Democratic Party won well over 1 million more votes in all congressional districts in 2012 (and almost 5 million more votes in the presidential count). Yet the Democrats won only 201 seats in the House of Representatives. The Republicans maintained their dominant position after 2012, and currently hold 232 seats (with two vacancies) in the House.

With a majority of the population voting for Democrats in all the congressional districts you would expect a closer split (something like 218-217). So what happened?

In a few words, political parties at the state level have politically stacked - or gerrymandered - congressional districts in such a way that they are little more than manipulated political fiefdoms designed to benefit the political party in charge at the state level. The GOP has been much better at redistricting over the past two census counts, which helps explain why they can win more seats in congressional districts while losing the total vote count (the narrow district below is from North Carolina).

Redistricting has become such an art form that it allows political parties to manipulate and control outcomes long before the election is held (in class I have my students do an exercise that allows them to see how a fictional state with five congressional districts can end up with a 5-0 GOP sweep, or a 4-1 Democratic advantage, using the same population and party affiliation numbers).

Simply put, redrawing congressional district lines - and shoving unwanted voters into stacked districts - has allowed politicians to manipulate voting outcomes by shifting people in and out of districts until they get the vote count they want. 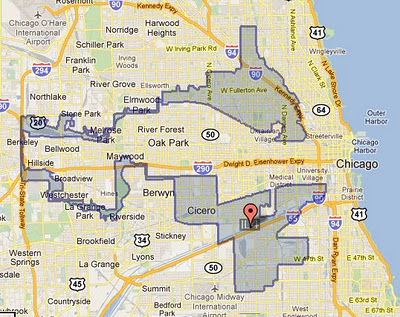 It's akin to going to Las Vegas and being told that you can pad the deck, and count cards while at the table.

This helps explain why, as the NY Times' Timothy Egans points out, the 232 Republicans who make up the House majority today don't actually represent the people of this country. Not even close.

Only 63 percent of the United States population is white. But in the House Republican majority, it's 96 percent white. Women are 51 percent of the nation, but among the ruling members of the House, they make up just 8 percent. (It's 30 percent on the Democratic side.)


According to Egan it's "a stretch, by any means, to call the current House an example of representative democracy." The policy priorities of our House leadership doesn't represent the will of the people because they owe their political lives to a process dominated by ideologues and party hacks (on both sides) rather than to people interested in making good policy.

There's more. Believe me, plenty more. So let me finish with this.

California has a population of 38 million. Yet it only gets 2 U.S. Senators. Meanwhile the 20 states with the smallest populations combined have about 37 million people. Yet they get 40 U.S. Senators. Does this seem fair? All you have to do is add five small or poor states to this mix and it's easy to understand why most of the smallest and poorest states in America have become net financial takers in our federal system. Most of these states get well over $1 for every dollar they send to Washington (what the Washington Post's Dana Milbank calls the "Confederacy of Takers").

California, according to the Tax Foundation, only gets 78 cents for every dollar it sends to the federal government.

In fact, if California were to get $1 back for every dollar it has sent to Washington since 1990 not only would California's $28 billion state debt be eliminated but California would be sitting on at least a $300 billion surplus (or enough to cover the hidden debt scenarios reported in January).

What's clear is that America's democracy is under stress. With gerrymandered districts and the smaller states siphoning off the wealth of the larger and richer states increasingly there is an un-democratic element to America's larger story.

The fact that Congress is tone deaf to much of this is disheartening, to say the least.

FYI: Is America the greatest country-democracy in the world? According to this clip, not by a long shot ...