I'm not sure, but I heard that if Puerto Rico didn't make English it's official language it would be admitted as a slave state. You know, to balance out all those Canadians who want Canada to become a state while continuing to speak Canadian.

But think about it. Rick Santorum should know this stuff. He was a U.S. Senator. He went to law school. He supposedly read the U.S. Constitution. He should know something about the law. Specifically, there is absolutely no constitutional requirement or federal law that requires English as a condition for statehood. 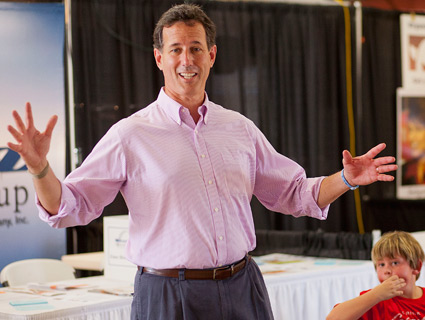 I already made Santorum the week's village idiot a few weeks back. He must be bucking for village idiot of the season (a new category), which takes a whole lot of dummy to achieve.

Suggesting that becoming a state in the Union means that English "has to be the principal language" is not the sign of genius. This is especially the case since Santorum has had many other gaffes of this magnitude. ¡Que pendejo!

We just might have our first seasonal village idiot. Stay tuned.

I don't get it Dr. How can people be voting for this guy? Then again stupids hang out together, I guess. Santorum picks on Puerto Rico, and then Mississippi makes fun of a Puerto Rican by asking,"where's your green card." SERIOUSLY? Are they getting lessons on citizenship from Rick?