The stock market has hit 13,000. What an unexpected turn of events (wink, wink). So, should we all be happy campers? Well, OK ... Yipeeeeee!

Well, ummm, wait a minute. Didn't I already say this was going to happen? And for all the wrong reasons too? Oh, yeah, I did. Several times. In the last half of 2011 I wrote several posts where I predicted that market players would become the beneficiaries of additional money dumps from the Federal Reserve. That is, the bailout gravy train (known as Quantitative Easing III) would continue for Wall Street. 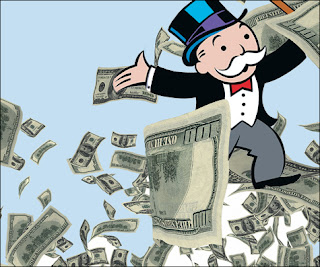 And it happened, just as I said it would (this is getting way too easy).

If you want to take a look, here's what I wrote back in August, September and in December of 2011. In all three posts I said we would have another money dump that would benefit Wall Street. Specifically, here's what I posted in December.


* The Federal Reserve was lending dollars to European central banks.

* The idea was to put enough cheap dollars into European central banks so that they will lend to European domestic banks.

* This was necessary because if European banks, who need dollars, can't borrow dollars cheaply they would begin dumping (selling) U.S.-denominated assets, like U.S. stocks, mortgages, and corporate loans (among others).


Because European banks would be able to borrow dollars cheaply they wouldn't have to sell U.S. assets in the immediate term. This would benefit U.S. markets because by making dollars available in Europe the Europeans wouldn't have to start dumping U.S. stocks and bonds in order to secure dollars to pay off dollar denominated obligations.

This process would help maintain (or inject) confidence in the U.S. stock market, and stave off a Wall Street fire sale, and potential market collapse. This should come as no surprise. It has worked in the past (except when QE I was announced because of how inept Washington was during the last months of the Bush administration) ... 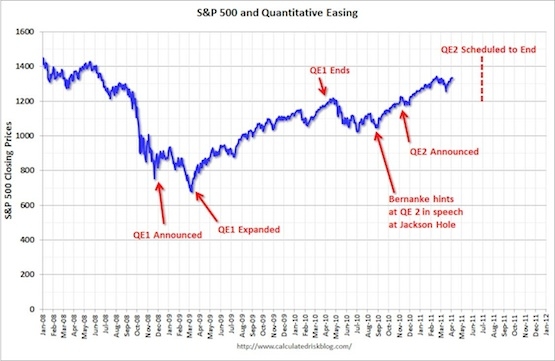 And what do you know? Just as we saw with previous money dumps (called Quantitative Easing I and II), we're getting to see yet another sign that the U.S. economy is recovering (cough, cough) after the Federal Reserve made it clear that they would make cheap money available to Europe in December of 2011. This, in turn, has kept Europe's financial institutions from dumping U.S. denominated assets. The U.S. stock market has thrived ... as expected.

The point is this. Dow 13,000 is being backstopped by you and me (I'm not convinced by the European swap talk either). Put another way, today's market rally is artificial and inflated by the Fed's money dumps.

Worse, as one European bank chief, and the Wall Street Journal's Simon Nixon have made clear, by continuing the money dumps we may be just sweeping the day of economic reckoning under the rug. More to the point, now that the Greenspan Put has gone global the seeds of the next crisis are now being laid.