KEN STABLER SHOULD BE IN THE HALL OF FAME 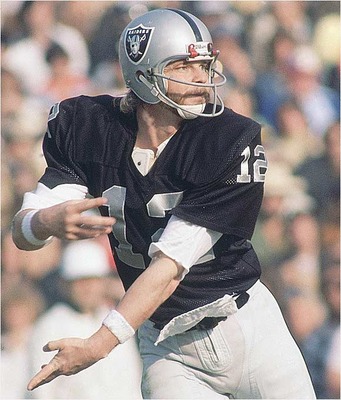 With the NFL season coming upon us I think it's time to make the case for putting Ken Stabler in the Hall of Fame.

PERSONAL STATISTICS
Let's start with this. Ken Stabler is considered one of the top 10 clutch quarterbacks in NFL history (#6) and has the stats to match other hall of famers, like Joe Namath and Bobby Layne. Take a look at the Namath-Stabler-Layne comparison ...

Not only did Ken Stabler lead the NFL in passing touchdowns in 1974 and 1976, but he's one of the top ranked quarterbacks in terms of winning percentages.

But it isn't just Ken Stabler's personal stats, and how they stack up against other Hall of Famers who were his contempories. It's who Stabler played and won against. 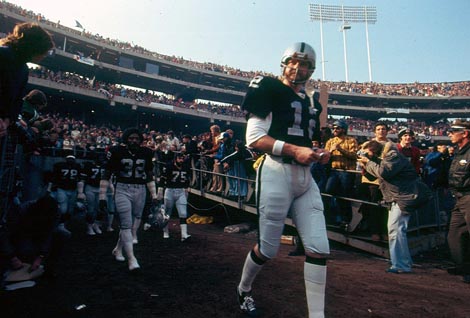 The Oakland-Pittsburgh rivalry featured 14 Hall of Fame players (seven on each team [8 now with Ray Guy]), a Hall of Fame coach, and two Hall of Fame owners. Stabler was not only in the middle of all of this, but he helped make the magic of the games happen by making everyone who played kick it up a notch. But the Raiders under Stabler didn't just win a few games. During this stretch the Raiders had the best winning percentage in the NFL (.798), with the Miami Dolphins (.750) and the Pittsburgh Steelers (.744) falling right behind the Raiders. 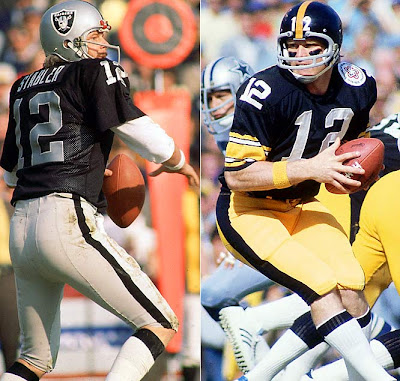 It wasn't just the personal statistics and team winning percentage that tells us Stabler should be in the Hall of Fame. Perhaps Stabler's greatest claim to fame were the number of NFL "greatest games" and "greatest teams" Stabler played and won. While Raider fans suffered through the "Immaculate Reception" game (which I watched with great frustration), people forget that it was Stabler who ripped off a 30 yard TD run that set up the last minute heroics of Franco Harris. 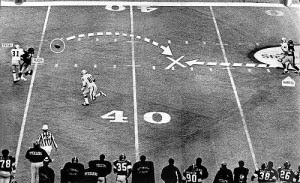 Also, under Stabler the Raiders ended the Super Bowl champion Miami Dolphins hopes for a second undefeated season by beating them in Oakland early in 1973, and then ended their 31-game home winning streak in 1975 by beating the Dolphins in Miami. Keep in mind these Dolphin teams not only won two Super Bowls in row, but finished the only undefeated championship season in NFL history. 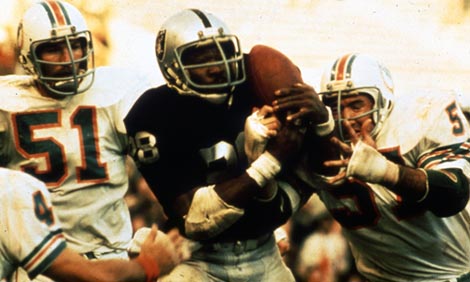 Then there was what NBC announcer Curt Gowdy called the greatest game he ever watched, the "Sea of Hands" playoff game against Miami (I still can't believe Clarence Davis caught the ball). Stabler also played in what was then the third longest game in NFL history, against the Baltimore Colts, in what is now fondly referred to as the "Ghost to the Post" game. Then we had the "Holy Roller" against San Diego, which every Charger fan remembers with great passion. 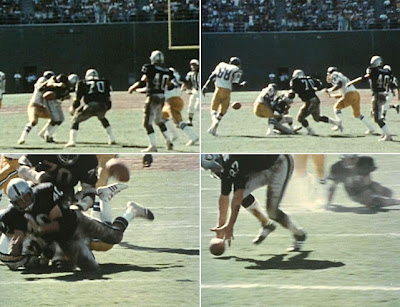 Finally, there's the issue of why Ken Stabler is not in the NFL Hall of Fame.

THE LIFESTYLE & THE MISFITS
While one of the reasons suggested is that he had mediocre years after he left the Raiders one only has to check the last 3-4 years of Bobby Layne and Joe Namath. Nothing to write home about. I could be wrong, but what seems to be at stake is how some fans and voters look at Ken Stabler's off-field lifestyle when he played. This is precisely why it's instructive to compare Ken Stabler with Joe Namath and Bobby Layne.

Even if Stabler may have studied the playbook by the light of the jukebox from time to time, neither Namath nor Layne were famous for going to bed at curfew before games. Both were famous night crawlers. Perhaps just as important is the fact that Ken Stabler played with a team of misfits that both fed - and fed off of - Stabler's habits. It's hard to see the Raiders winning the way they did with, say, a Roger Staubach at quarterback. 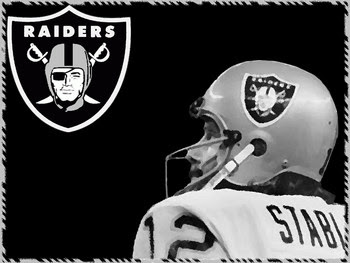 There's more, but when you compare Stabler to others who are in the Hall of Fame, Stabler's personal statistics, his Raider team's winning percentage, the gut check great NFL games he played in, who Stabler played and won against, and the misfits he inspired and played with in Oakland, it's hard to argue that Ken Stabler doesn't deserve to be in the NFL Hall of Fame.

If Joe Namath and Bobby Layne are in Hall of Fame, Stabler should be too.

UPDATE: It looks like Andy Barall from the NY Times is getting into the debate. Check this out. I especially like this YouTube video that features Stabler.


UPDATE: Stabler is now ranked #25 by Athlon Sports in "The NFL's 25 Greatest Quarterbacks of All-Time"

The best way you can help induct 'The Snake' into the Pro Football Hall of Fame is to send in your nominations to the Pro Football HOF (heck, send them a copy of this post). Send soon and send often. The letter you write in will be submitted to the Board of Selectors.

UPDATE: I edited out the original reference to winning 100 games. The games played math didn't add up.
Posted by Mark A. Martinez at 7:47 AM

What do we have to do to get not only Stabler in, how about Cliff Branch, Ray Guy, and Lester Hayes.

What do we have to do to get Stabler, Cliff Branch, Ray Guy & Lester Hayes in to the Hall?

I send out three letters a week nominating Stabler to the hall of fame... this is what I wrote:
I would like to nominate Kenny Stabler to be inducted into the hall of fame. Anyone who was fortunate enough to watch Kenny play in the 70’s was amazed! Also, Anyone between the ages of 48 through 55 would rank Kenny in the top 5 quarterbacks of all time. Kenny is #1 on my list and he should have been inducted in the hall of fame long ago!
While I know that Kenny Stabler has been nominated AND been a Hall of Fame finalist on three separate occasions, I feel I need to beat the drum once more for one of the greatest quarterbacks of the 70's (or really any era), Kenny Stabler. What's not to like about a man who always gave the fans their monies worth, while winning 65% of his regular season games and 57% of his post season games, in an era dominated by the Steelers and Cowboys?

Come on HOF, you have the wrong Bama boy in there right now...correct your mistake. One Super Bowl victory over the Colts by Namath doesn't wipe away a decade of winning and a Super Bowl win by Stabler. You have some of Stablers receivers in there. Would they be there without their QB? NO! Time to fix your mistake and let Stabler in! -Enough Said.