ANOTHER EPIC FAIL WEEK FOR THE GOP

Remember the republicans first week in power? I wrote about it here. Check out the low lights.

* When asked about their pledge to cut or save $100 billion from the budget during their first year in power republican leaders fell over themselves, after assuming power, to say "Did you read the fine print? There are qualifiers ..."

* Then we learned that they were going to go through with their political charade to repeal health care reform - in spite of the fact that they knew the Senate would not support them, and that the President would veto the bill.

* Then they read the U.S. Constitution on the House floor, because reading is so educational.

* Then, for good measure, House Republicans voted against requiring members of Congress to disclose whether they're taking advantage of taxpayer funded health insurance plans, or if they've purchased private plan in the free market (so much for transparency).

Since then - rather than focusing on the economy - the GOP announced they would redefine what constitutes rape, only to follow this up by suddenly announcing that they would pull back from this effort. Then, on Thursday, they proposed a budget proposal that falls $68 billion short of their election season promise to cut $100 billion from the budget.

Governing isn't so easy when your political strategy depends on blowing smoke, scoring cheap political points and being obstinate, is it?

Still, in spite of passing legislation in the House that the Senate rejected (as everyone knew it would), and failing to cut $100 billion from the budget, republicans are claiming that defeat on issues that they campaigned on puts them right where they need to be for victory in 2012.  Seriously. Check it out here.

Fortunately for the GOP they have a neat photo ready to help convey their sense of accomplishment in the midst of mission failure ... 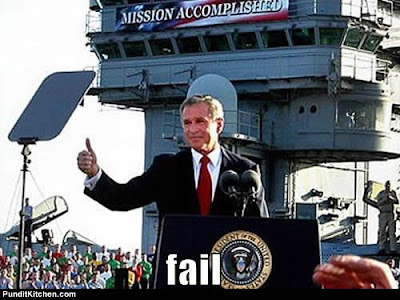 And, in case you missed it, the GOP still has no new proposals on a jobs program, or any plans to assist financially strapped cities and states. But their tax cuts for the rich and "Just say No" to Obama platform are right on track.

Oh, and under Speaker Boehner's watch, women in Congress are going to get a new bathroom.