FROM GREEK TRAGEDY TO HISTORICAL FARCE ... THE DEBT-DRENCHED LESSONS OF GREECE

After World War I the victors assembled in France to assess the future. In Article 231 from the Treaty of Versailles (1919) - the infamous "war guilt" clause - Germany was obligated to pay the equivalent of $32 billion (about $389 billion today) to their former enemies. Famed economist John Maynard Keynes would refer to the terms as a Carthaginian Peace, a phrase now used to refer to any punitive pact or treaty that does little more than impose brutal terms, and remind a defeated party that they are in an inferior position.

At the time many economists, including Keynes, viewed $32 billion as excessive. Keynes, and other Versailles participants wanted the slate wiped clean. In their view, little was to be gained - and much would be lost - if the punitive terms of Versailles were pursued. The League of Nations agreed, and supported the reduction of Germany's war reparations to $28.3 billion.

But the debt burden was still too much. Early in 1929 the Young Plan was introduced, which reduced Germany's war debt to about $713 million (about $9 billion today). But the dye had been cast. The political environment that would nourish the likes of Adolf Hitler had been created. 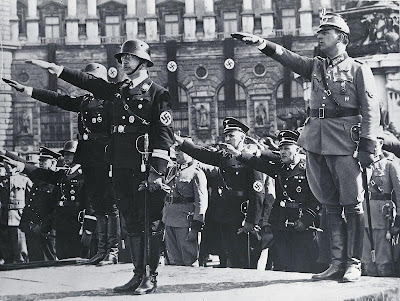 When the Great Crash occurred in 1929, it insured that all discussions surrounding The Young Plan for Germany would be akin to rearranging the deck chairs on the Titanic. The plan emerged, but it was still-born. There was no turning back the clock.

The lesson from this period is clear: Debtors should not be driven into a blind alley. This appears to be a lesson the world seems to have forgotten, or is too tone deaf hear.

THE BLIND ALLEY of DEBT
While the lessons of World War I are many, they are clearly being ignored today. Domestically, in the United States, Wall Street has been allowed to profit from scurrilous and ethically challenged contracts of dubious utility. Meanwhile brutal and draconian terms are being prepared for taxpayers, workers, and (former) homeowners. This is happening on many levels across the globe.

Abroad we're now watching a Greek Tragedy unfold. Today, Greece's financial problems are being driven by debt to earnings ratio of approximately 113% in 2009. Put another way, for every Euro Greece earns they owe 1.13 (for purposes of comparison, the debt to GDP ratio for the United States today is about 87%). Interest and penalty fees will compound Greece's problem, with one report suggesting that Greek debt levels in 2010 will reach 125% of earnings (of GDP). Things could get worse. 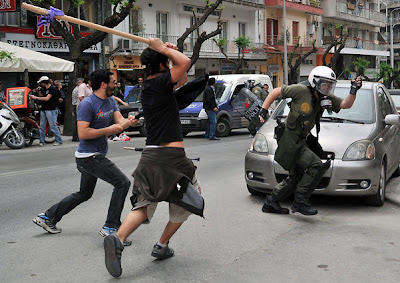 This helps to explain what's been happening in Greece. Riots, the likes of which we haven't seen since Argentina in 2001, have become standard fare. They're even eliciting fears that things will get worse should tourists decide to stay away from the cradle of democracy for a long period of time. At the heart of the protests are concerns over belt-tightening measures - wage cuts, higher taxes, spending freezes, etc. - imposed in Greece, which Argentinian President Cristina Fernandez de Kirchner said were "almost identical" to the ones imposed on Argentina in 2001.

“The international multilateral lenders, which keep offering the same old prescriptions, still don’t understand what’s going on in the world.”

To be sure, debtors should be responsible for their obligations, but only to a point. The road to the free market is a two-way street. Little is ever said about the reckless lenders and their dependence on favorable legislation, or how government strong-arm tactics impose draconian terms on the middle-class.

The dependence of market players on favorable legislation seems to have reduced their commitment to perform simple due diligence, or to exercise simple common sense. Just because you create a highly profitable but market destroying investment instrument doesn't mean you deserve to get paid for it - especially if the instrument turns out to be crap. What about credit write downs? When do we start winding down the expectations of arrogant lenders and the financial leeches who gamble on their activities?

Then we have the global and domestic double standards, which are increasingly obvious for others to see.

THE EMERGING DOUBLE STANDARD
As evidence of the emerging double standard, consider what a collapsing Greece is being asked to do in return for a 110 billion-euro loan package from the euro zone countries and the IMF.

* Freezing public sector pay until 2014
* Reducing allowances in the public sector by 20%.
* Increasing VAT from 19% to 23%
* Raising excise taxes on fuel, alcohol and tobacco by 10%.
* The imposition of new gambling, property and green taxes.
* Slashing or freezing state pensions.
* Increasing the average retirement age from 61 to 63 years.

Now consider what happened in the United States when Wall Street blew itself up, and the financial markets collapsed:

* Public sector borrowing increased.
* Budget deficits grew, which are now supercharging the national debt.
* Government bailout loans, plus tax payer-backed trillion dollar guarantees for Wall Street.
* Tax cuts for the middle class (in spite of what the Tea Baggers want you to believe).
* Health care reform that expands coverage to millions of more Americans (while this is on mark to reduce budget deficits, the symbolism of increased government assistance is not lost on others).
* Continued favorable legislation for the financial sector that continues to subsidize profits, and doesn't walk back deregulation policies from the 1980s & 1990s.
* Wage cuts, but only for certain public sector employees in many states.

To be sure, I understand the Golden Rule (He who has the gold makes the rules). But the United States no longer controls it's financial fortunes, as this graph depicting total debt in America (Federal, State, Local, Personal, etc.) indicates. 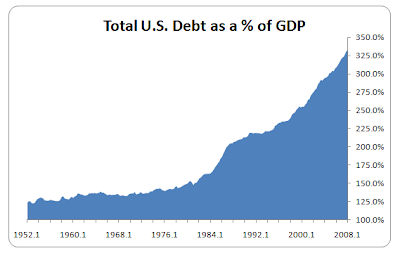 Nor is the United States in a position to help manage a debt-drenched world (Federal Debt to GDP ratio) that, for some, may look like a bad pre-quel to 1929. 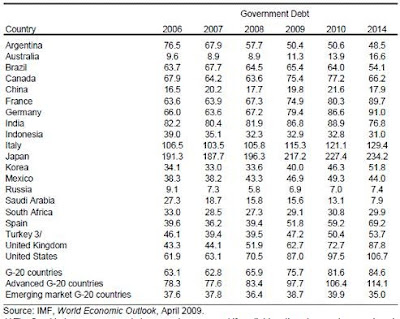 In case you're wondering, after Germany was granted better terms in the 1920s it's Debt to GDP dropped to roughly 85% (about where the United States is at today).

CONCLUDING REMARKS
In his book The Economic Consequences of the Peace John M. Keynes points to Vladimir Lenin, who remarked that the best way to destroy the capitalist system is to debauch the currency. In Keynes' view, standing by while debt obligations pile up and become burdensome only leads states into continuous cycles of borrowing and printing money. This creates the conditions for inflation to flourish. He was predicting Germany's hyper-inflationary period years in advance.

As noted above, the lesson is clear: Debtors should not be driven into a blind alley.

What's happening in Greece today, and with the world doing little in the way of reigning in Wall Street's gambling on debt (or disciplining firms like Goldman Sachs), there's little hope that any kind of discussion on credit write downs will occur any time soon (though these guys seem to have some good ideas). In fact, it appears that the European Union only has "procedures" for excessive deficits, and not for those who seek to cannibalize it.

Simply put, there's too much money to be made on debt, even if it means the staggered collapse of the European Union.

If there's any truth to what Karl Marx said about history, we need to take a hard look at the debt-drenched position that Greece, the rest of the so-called PIGS, and the developed western states now find themselves. As Keynes noted after considering the dire straits Germany would find itself confronting in the 1920s, there will come a breaking point: " ... who can say how much is endurable, or in what direction men will seek at last to escape from their misfortunes?"

What's occurring in Greece today may be the first act in a larger tragedy. Still, we know one thing. The financial games the world played (the Dawes and Young plans) after Germany ran into financial trouble in 1922 may have granted the world a temporary reprieve. But it also allowed the serpents of fascism and Nazism to escape and prey on weaker souls.

With the historical lessons clear, and with EU regional repercussions on our radar screen, one thing is certain: This is not just Greece's problem.