If you don't live in Bakersfield you'll find it interesting to know that at one time our city regularly hosted a conference that was part of Bakersfield's "to do" list. I attended one year, and was impressed by it's size and scope. A virtual - and impressive - tent city was erected on the California State University Bakersfield campus, which helped bring in mega speakers and guests from around the world. Even though the Small Tent speaker list made it appear to be a bi-partisan event, the mega-star list of conservative speakers for the Big Tent made it clear who the event was really for (being inside the Big Tent made it clear as well). The conference was halted a few years back but it is scheduled to appear again this year. I recently wrote an article for Bakersfield's newest on-line media effort, Bakersfield Express. Below is my perspective on the conference, with necessary budget and financial updates. Enjoy.

*****************************
In “The Republic,” Plato imagined a world filled with people living in a dark cave. Their eyes were capable of seeing only silhouettes and were permanently fixed to a cave wall. They could not see the events and objects that created the shadows. When one of the cave dwellers emerges to take a look at the real world, his senses are overwhelmed. For Plato, it was the duty of the elite, or enlightened leaders, to educate those bewildered by the shadows on the wall, and the events that created them.

Herein lies the problem that plagues our world. What happens when the leaders are as equally clueless about the shadows on the walls as Plato’s cave dwellers? It looks like we’re going to find out at this year’s Bakersfield Business Conference, to be held Oct. 9 on the campus of California State University, Bakersfield.

There are many shadows to talk about on our cave wall. There are the “dark paranoia” shadows. This explains Dick Cheney’s invitation. There are the “smoke and mirror” shadows. Welcome Karl Rove. And then there are the “ignorant and stupid” shadows that dance about on the walls more than the others. These, one would assume, will be covered by Sarah Palin. 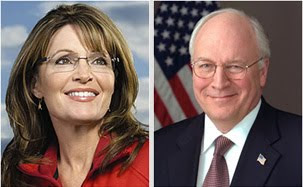 What the Shadow Talkers are here to do is explain a world they don’t really understand because, quite frankly, it doesn’t really exist. Put another way, they’re here to explain market fairytopias and the demons that haunt their souls. Let’s take Dick Cheney.

He’s been getting virtually everything wrong about our enemies since the Cold War. For example, during the 1980s he was speaking about the durability and threat that an omnipotent Soviet Union posed to the United States – right up to the moment that its empire collapsed. Oops.

Then Dick Cheney claimed that Saddam Hussein was the bad guy we needed to fear because he had weapons of mass destruction. We all know how that went.

Dick Cheney has a legacy of getting the world wrong, and the coordinators of the BBC think he actually has something meaningful to say to our nation’s myopic cave dwellers? (Cheney is also famous for claiming “deficits don’t matter.” But that’s another story.)

Then we have Sarah Palin. Or, as Cenk Ugyr from The Young Turks might put it, we have “the irrefutable stupidity of Sarah Palin.” (Don’t get ahead of me on this one; keep reading).

Now, we could discuss how Sarah Palin didn’t know that Africa is a continent, or that the players in the North American Free Trade Agreement are the U.S., Mexico and Canada. Then there’s that famous ABC Moment when she had no clue about the Bush Doctrine (it’s about preemption), or the bailout proposal. I could also discuss Sarah Palin and her position on Intelligent Design. I won’t say anything more than to remind everyone that the Flintstones isn’t a documentary.

But what’s really disturbing about inviting Sarah Palin to our regional cave convention is her complete and utter disregard for the historical record, and how her rhetoric is at odds with her reality. Let’s consider what she supported while she was in her Alaskan cave, and how her life is more socialistic and tied to the redistribution of wealth than anything President Obama has ever concocted.

Consider this little nugget. Alaska ranks number three nationally when it comes to what its citizens pay out in federal taxes, and what it receives from the federal government. For every dollar Alaskans pay into the system, they take $1.84 out. Put another way, Alaska’s hardened sense of “rugged individualism” is really built on a foundation of communal welfarism, direct from the American taxpayers in the lower 48.

This probably explains why Alaskans have come to see oil within their borders as a form of community property. Big oil in Alaska must send the state a check for every barrel they pull out of the ground. The state then turns around and redistributes the wealth. In 2008, for example, Sarah Palin and the federal government watched over a system that distributed $3,269 per Alaskan citizen ($1,200 of this came from a resource rebate program). This adds up to just under $20,000 for the Palin family. While each Alaskan is scheduled to receive only $1,305 for 2009 we shouldn't lose sight of the fact that this money falls into each Alaskan's lap for no other reason than the state embraces a wealth distribution policy that many rugged individualists claim to despise (wink, wink).

With that much money from the Feds and Big Oil you would think someone might inform Alaska’s cave dwellers about their socialist tendencies. Not Sarah Palin. Instead of calling it the “Redistributing the Wealth Because We’re Really Communists Fund” – as Sarah Palin might call it if President Obama suggested the same program nationally – the state of Alaska calls it the “Permanent Fund Dividend.” Just more shadows.

Does anyone think Palin’s going to explain her shadows at our regional cave convention? Imagine what would happen if she carried her redistributive message to oil-laden Kern County. But the chances of this happening are about as good as Dick “Chicken Little” Cheney explaining how his five deferments make him a true patriot.

We now live in a country where Christian Fundamentalists believe that abortion is bad, but war and the death penalty are to be exalted.

We now live in a country where people believe it was OK for Ronald Reagan to almost triple our national debt, and for George W. Bush to more than double it. But President Obama is a big spender because he inherited a $1.3 trillion deficit (that's ballooned to $1.6 trillion), a sinking economy, and two bungled wars.

We now live in a country where compassion has more to do with condemning the poor while we provide America’s wealthy with government escorted profits and bailout dollars that reach into the trillions of dollars.

Instead, Dick Cheney and Sarah Palin are going to explain the silhouettes they see on the wall, as they want to see them. Palin’s a rugged individualist. Cheney’s a warrior-nationalist. Forgive me for saying this, but I think we are better off in the dark.