In this post-article, the author of The Best Way to Rob a Bank is to Own One (and current Roosevelt Institute Braintruster), William K. Black, takes a look at the currrent state of our "finance economy" and what it has done to the long-term vitality of our nation. 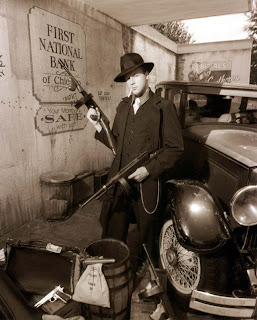 I like what Black - who is a lawyer, an economist, and a former bank regulator - writes because it mirrors what I say in my book about the "financialization" of the American economy. Specifically, he makes it clear that easy money (Greenspan's cheap interest rates), favorable legislation (deregulation like Gramm-Leach), and growing debt loads (both consumer and national) have undermined our nation's economic health and our system of democracy over the past thirty years. Among the many points that Black makes include:

* Forty years ago, our real economy grew better with a financial sector that received only 2% of our nation's profits rather than the 40% it receives today.

* That the financial sector misallocates capital by encouraging financial firms to - as Joseph Schumpeter might have put it - play monopoly rather than loan the funds necessary for building monopolies.

* The financial sector produces and hyper-inflates bubbles that cause severe economic crises (think about the many bailouts over the past 30 years).

* Finance CEOs and those that they help to enrich adopt and spread the myth that they are smarter, harder working, and more innovative than the rest of us (they're not; favorable legislation makes them think they are).

* This Social Darwinistic approach not only contributes to accounting and control fraud, but is cancerous to our nation's moral fabric. Indeed, the CEO’s of our largest financial firms are so powerful that they now pose a critical risk to the financial sector, the real economy, and our democracy

There's much more so I encourage you to read the article. If the article seems a bit long (or too technical) you might want to try this more recent one penned by Black at Huffington Post. It questions President Obama's decision to keep Tim Geithner and other Bush-era economic gurus around. Both make it clear, the banksters are winning the day because the economic Mandarins in our government are doing the bidding of the banks.

A judge sided with a couple and said they did not have to pay the bank back their money. He added the couple had to deal with what looked like "organized crime." Looks like judges also agree with you, Dr. Martinez.