REP. TOM UDALL GETS IT 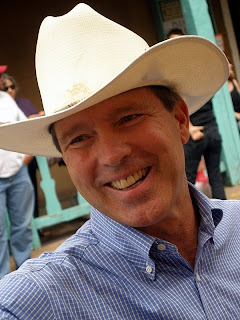 U.S. Representative Tom Udall (D-New Mexico) gets it when it comes to President Bush's efforts to illegally spy on Americans, and then grant the telecom industry "retroactive immunity for helping him do so. Here's his statement on H.R. 6304 in it's entirety.

"The FISA legislation we considered today has important implications for Americans' fundamental freedoms.

“First, today's legislation gives the Bush Administration considerable leeway to continue spying on Americans. The Administration has shown that if Congress gives them an inch, they will take a mile. After their past behavior, it would be irresponsible to give them an opportunity to further encroach on our civil liberties and right to privacy.

“The legislation also sends the message that private actors can work with the Executive Branch to violate the rights of Americans with impunity. Throughout the FISA discussion, I have been clear: I will not support legislation that would grant blanket immunity to telecommunications companies that may have unlawfully helped the Bush Administration spy on Americans. Make no mistake, today's legislation provides blanket immunity. By letting companies off the hook if they were asked to commit illegal acts by the government, the bill ensures that any Americans whose rights were violated will never have their day in court.

“Although the Democratic leadership supported this bill, I could not. It infringes freedoms so fundamental that they cannot be compromised. The right to be free from governmental spying is enshrined in our Constitution, our basic American values and the principles of ordered liberty.

“America's laws should keep us both safe and free. Today’s bill would sacrifice essential liberty in ways that do not contribute to our security. For that reason, I could not support it.”

It's too bad the presumptive nominne for the Democratic party Barak Obama voted FOR the compromise bill, after blasting the whole concept earlier. I've about had it with politicians that feel the need to "compromise" on BAD AND DANGEROUS concepts that need to be sharply challenged. Witness what happened locally on tghe high school board. Members who knew better felt instead of saying NO, they needed to find a way to make it "work." Same thing happened on the city council with the ant-immigration measures proposed. THey had to find a "compromise" to make it work instead of just rejecting it. THis is the way our country is taken over from within. We live in this climate of fear and are surely losing our freedoms, slowly but surely.