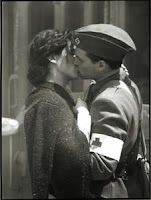 Apparently Congress can't be bothered to look into a Pentagon deliberately using retired military officers, who work for defense contractors, to push a disasterous war. Exposing our fighting men and women to the prospects of an unnecessary death is OK by them. It's really not that important that we've sunk America's blood and treasure into a bottomless pit of political incompetence.

But the prospect of our GIs being exposed to naked people? Well, Congress has to act on this.

U.S. Congressman Paul C. Broun (R-MD) is introducing legislation designed to close a loophole that allows the sale of pornography on military installations. The "Military Honor and Decency Act" redefines “lascivious,” “nudity,” and other stuff that Broun finds offensive.

My guess is that his legislation will have some kind of amendment so that our military personnel, as per Bush administration sanctioned policy, can still do their jobs and stack the naked bodies of prisoners like wood, torture, and conduct sexually humilating interrogations. We can only take this "decency" and "offensive material" thing so far, right? It's a matter of national security.

Doesn't this guy have something better to do? What an idiot.