THIS IS HOW YOU INFECT A NATION, AND THE WORLD

This is a reminder of how we got infected passengers sent back to the United States, with the blessing of the Trump administration ...

On Feb. 12, U.S. officials briefed members of Congress in a closed-door hearing. Rep. Phil Roe (R-Tenn.), a doctor, had also heard from a friend and fellow doctor, Arnold Hopland, of Elizabethton, Tenn., who was on the ship with his wife, Jeanie. Hopland told Roe about the deteriorating conditions.“That tipped the balance,” said the senior administration official.

By Friday afternoon in Washington, there was agreement among all the agencies in the U.S. coronavirus task force to evacuate the Americans.

You can read about America's path towards a viral clusterf*%&#  (to be sure, the article's actually titled, "Coronavirus-infected Americans flown home against Center for Disease Control's (CDC) advice") by clicking here. 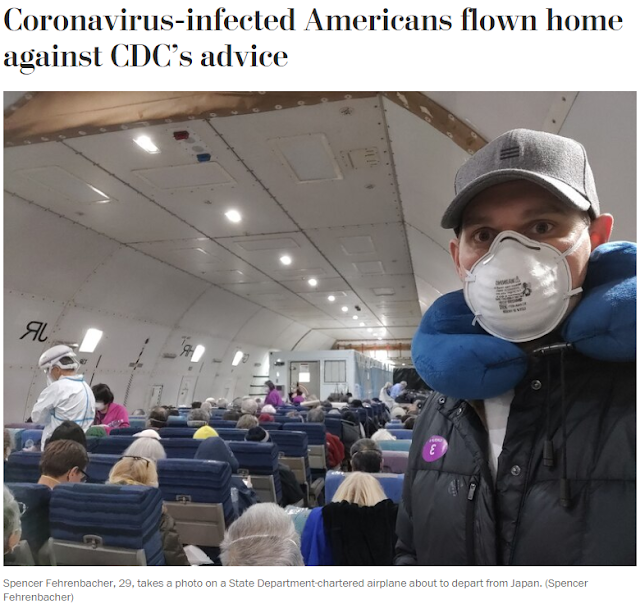 But wait, this ugly turn of events gets better (or is that worse?). In 2019 Donald Trump began closing the federal program that investigates diseases and animal viruses that might infect humans because - and this is the fun part - President Obama supported it. 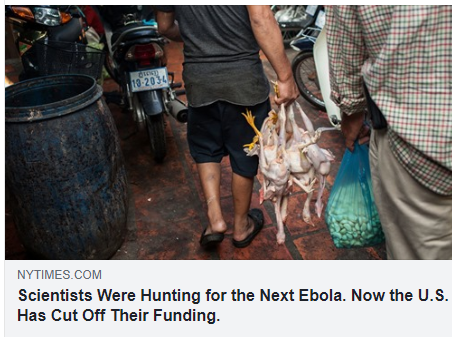 The program - known as "Predict" and run by USAID - not only found over 1,000 new viruses but learned that "a new animal disease that can also infect humans is discovered every four months."

The Predict program also sponsored epidemiological modeling to predict where outbreaks are likely to erupt, and fought to curb hunting and breeding practices that encouraged viral eruptions.

Over 10 years the program, which was supported by both the Bush and Obama administrations, cost $207 million, which equals .000129% of the $1.6 trillion tax cut that Trump and the GOP gave to America's richest groups two years ago (for the sake of comparison, the U.S. spent $5 billion combating Ebola in West Africa). So, yeah, cutting the program had little to do with financial costs, and more to do with incompetency and political point scoring.

You can access the NY Times article explaining the entire mess by clicking here.

Did you realize there is a 12 word sentence you can say to your man... that will induce intense feelings of love and impulsive attractiveness for you buried within his heart?

Because deep inside these 12 words is a "secret signal" that fuels a man's impulse to love, please and care for you with his entire heart...

This impulse is so built-in to a man's mind that it will drive him to work harder than before to do his best at looking after your relationship.

In fact, fueling this influential impulse is so binding to getting the best possible relationship with your man that once you send your man a "Secret Signal"...

...You'll soon find him expose his soul and heart to you in such a way he's never experienced before and he will recognize you as the one and only woman in the world who has ever truly tempted him.