HOW I'M VOTING ... PLUS SOME HELPFUL BALLOT INFORMATION FOR THIS NOVEMBER 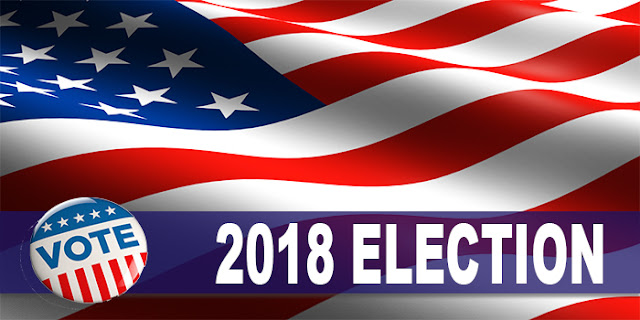 Below is my sample ballot, which tells you how I plan on voting on November 6th (click on the ballot to enhance clarity) ... 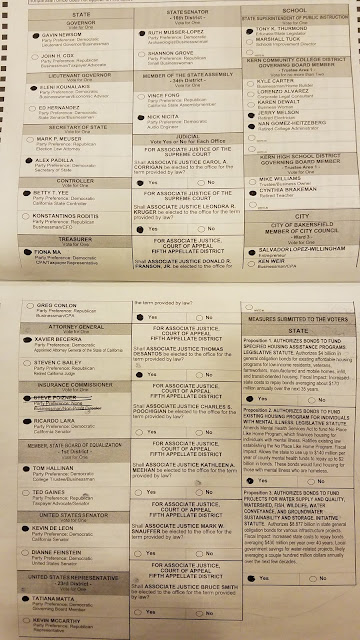 While I reside in California's 23rd congressional district, which makes House Majority Leader Kevin McCarthy my Rep., I am encouraging everyone who can to vote for his opponent, Tatiana Matta, in the 23rd district.

For those who live in the San Joaquin Valley, but outside my congressional district, I'm asking you to vote for TJ Cox in the 21st congressional district (over David Valadao) and to support Andrew Janz (over Devin Nunes) in the 22nd congressional district. Many of the problems we have at the national level stem from having a Congress with no backbone. Our Republican-led Congress doesn't seem to understand what separation of powers means, and seem more than willing to turn a blind eye to Donald Trump's corruption of our political system (no matter how bad it gets).

Below is a pretty nice look at the ballot initiatives, with major supporters for each initiative.

While you may want to take your cue from a particular group's position listed above, I am letting you know how I will vote on the initiatives below, with most of the easy to understand commentary posted by my friend Seven.

Prop 5: NO. Rich people need to stop trying to take away money from low income communities and schools, thanks.

Prop 6: NO. " I agree that the gas tax is regressive and hits the poorest people the hardest, but that money is actually going to vital fixes on our infrastructure. These are projects that have directly benefited some of the worst roads in our area. NO"

Prop 8: Yes. You shouldn't have to go bankrupt to not die, c'mon people.

Prop 11: No ... "This proposition is backed by a company that lost an unfair labour case and is trying to wiggle out of paying back pay to EMTs, paramedics, dispatchers, and other first responders. First responders deserve to take paid breaks during their shift, just like everyone else. It's dangerous to make them work 12-24 hour shifts with no breaks. NO"


IN KERN COUNTY AND BAKERSFIELD ...

The Three Cannabis Initiatives in Kern County, Measures J, K and O: Quoting from my university colleague - a guy who's writing his Ph.D. on the drug trade - all of the cannabis measures have some flaws. Still, Measure K is especially challenged because it creates monopolistic conditions. Vote No on "K" but cast a YES vote YES on both "J" and "O" to help Kern County muddle along until the city and our region get their act together.

Bakersfield Measure N: Yes, anything would be an improvement over the current state of our emergency services in this town.

If you live in Arvin, vote with Mayor Jose Gurrola. He has some great plans for the city, and he's willing to stand up to the oil industry.

Finally, while I do not live in their supervisorial districts I would vote for ...

Grace Vallejo in the 4th supervisorial district, and