THE SHALLOW STATE ... ONE YEAR IN AND IT'S WRECKING AMERICA

Last year, just as the Trump administration was settling into the White House, David Rothkopf wrote in Foreign Policy about "The Shallow State." The message was clear. We should move past social media-fed Deep State conspiracy theories. We have something far more dangerous in front of us. And it isn't the Deep State monster that right-wing Twitter and blog experts like to speak spookily about because they like to believe they've cracked some kind of mysterious code (which only they could have uncovered, of course). 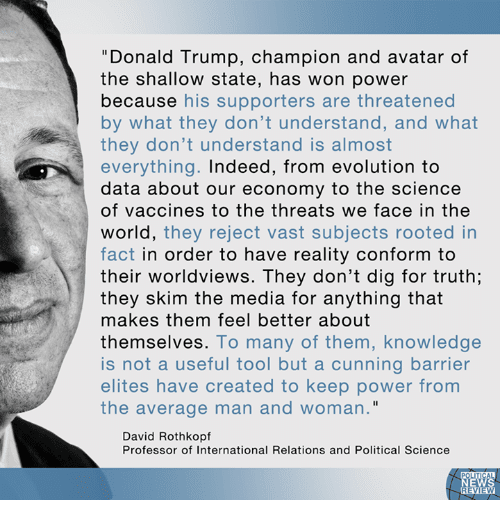 In fact, let me kill the drama on this one. The Deep State is basically made up of career bureaucrats, doing their job, who essentially keep the trains running on time (as it were). I know, kind of boring, huh? (Let me add, just because you don't understand bureaucracies, or the concept of checks and balances, doesn't mean your conspiracy nightmares and inflated sense of your analytical skills have to be taken seriously.)

So, instead of indulging the tin foil hat crowd, and the many Deep Staters who are part of this group, Foreign Policy's Rothkopf argues convincingly we need to worry about the growing power of an arrogant but ignorant group of people who both disdain expertise they don't understand, and willfully walk away from evidence they don't want to hear. On this, Rothkopf writes that the Shallow State is made up of people who:

... not only actively eschews experience, knowledge, relationships, insight, craft, special skills, tradition, and shared values but [they instead celebrate their] ignorance of and disdain for those things. Donald Trump, champion and avatar of the shallow state, has won power because his supporters are threatened by what they don’t understand, and what they don’t understand is almost everything. Indeed, from evolution to data about our economy to the science of vaccines to the threats we face in the world, they reject vast subjects rooted in fact in order to have reality conform to their worldviews. They don’t dig for truth; they skim the media for anything that makes them feel better about themselves. To many of them, knowledge is not a useful tool but a cunning barrier elites have created to keep power from the average man and woman. The same is true for experience, skills, and know-how. These things require time and work and study and often challenge our systems of belief. Truth is hard; shallowness is easy.


Think about it. In little over a year since Donald Trump took the oath of office, and we see the following political disasters unfolding in front of America's eyes:

* WESTERN ALLIANCE FRAYED: A fractured western alliance, and collapsed confidence in America's capacity to lead around the world.

* FRACTURED TRADE: America's withdrawal from - and failure to negotiate - commercial agreements, with no talks of replacement.

* LAW ENFORCEMENT UNDER ATTACK: Both the Trump administration and Republican leaders are attacking the FBI, a national law enforcement icon, for no other reason than to protect their Russian flank.

* TARIFF STUPIDITY: Donald Trump wants to childishly impose tariffs, in spite of a wall of history telling him that it's a phenomenally stupid idea.

* TRADE DEFICITS: The U.S. now has a trade deficit that's more than double what it was before Trump entered office.

* TRILLION $ BUDGET DEFICITS: We have trillion dollar budget deficits, again, even though there was no national emergency like the 2008 market crash to induce the spending spree.

* FAILED LEADERSHIP: The U.S. has seen its position eroded in Asia (to China), the Middle East (Syria and Iran are now looking to Moscow,), Eastern Europe (to Mother Russia), Africa (the shithole countries were listening), and Mexico (no explanation necessary here).


All of these developments, in just one year, require some serious incompetence. But wait, it gets better (or is that worse?).

We now have a president who's doing Vladimir Putin's bidding. Think about it. In Putin's wildest dreams he could never have expected an American president to refuse to impose bipartisan authorized sanctions against Russia, then impose tariffs that drives a wedge between the U.S. and its allies and then, for good measure, continue to say and do things that divide America along racial and class lines. 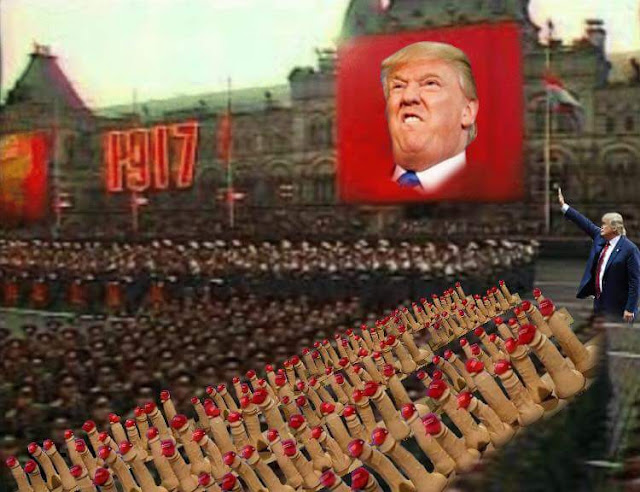 But with Trump, and his legion of Shallow State supporters, Vladimir Putin has gotten all three. And all for what? Because Trump owes Russian oligarchs a few bucks? Because Putin has incriminating or embarrassing evidence on him? Because our modern GOP is more interested in getting their Ayn Rand (who was a Russian immigrant) inspired agenda accomplished? Pick your poison. Either way, the damage Donald Trump and his Shallow State legion of sycophants is doing is real. Very real.

So let's forget about the conspiracies and what the Deep State is supposed to have done. It's the reality behind the idiots currently running the Shallow State who we should be worried about.