FAKE NEWS BEING CALLED OUT BY FAKE NEWS? 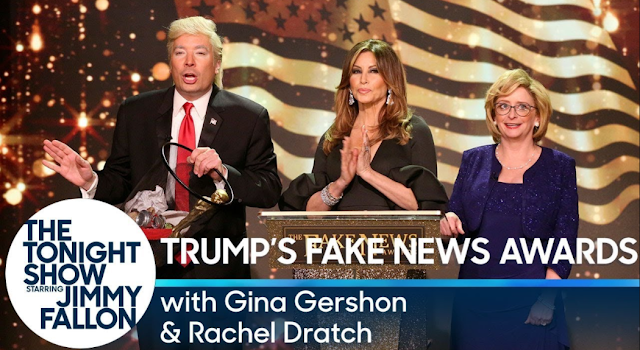 The Bakersfield Californian's Robert Price lays out what's happening at the local level with Sinclair-affiliated stations KBAK/KBFX. Specifically, Trump friendly Sinclair Broadcasting Group's local stations, channels 29 and 58, will be taking their "fake news" cues from their corporate overords when it comes to reporting.

As you can imagine, since KBAK/KBFX is supposed to be a local or regional news reporting institution, being told what and how to report by their corporate bosses does little to instill confidence in their journalistic integrity, or independence. This is especially the case since Donald Trump and his supporters - which includes Sinclair Broadcasting - seem to believe everything they don't like is fake news.

The funniest (worst?) part is how Sinclair is requiring their on-air personalities in 193 stations, in over 100 markets, to read the same prepared speech about "fake news" - which they're against, of course. Because they'll imply that everyone but themselves have fallen into the "fake news" trap, this speaks more to agenda setting than it does to guarding journalistic integrity. Local reporting and regional angles, of course, will likely be sacrificed at Donald Trump's Fake News alter.

Bob Price's article is below ...

Quick! Name the most influential conservative-leaning media company in America. If you said Fox, you're right, of course. But you get extra credit if you knew that the Sinclair Broadcast Group, the largest owner of local news stations in the country, is right there in the mix — and is by some measures considerably more consequential.
Sinclair owns and/or operates 193 stations in more than 100 markets, including Bakersfield, and is in the process of acquiring 42 more — in a $3.9 billion deal with Tribune Media Co. that would put its combined stations in nearly three-quarters of American households.
The merger with Tribune, if approved by the Justice Department’s antitrust division, will have been made possible by the Trump administration's move to relax regulations on broadcast ownership.
Now the Trump-friendly media company wants you to know how it feels about that scourge of modern society, "fake news."
It's against it.
And it has commissioned some friendly, familiar faces to tell its Bakersfield viewers: the charming and vibrant Aaron Perlman, Erin Briscoe, Rachelle Murcia and Dave Gonzales of KBAK/KBFX.
That's because Sinclair has decreed that the news anchors at all its stations across the country will read from a corporate-office-prepared script that criticizes media for reporting “fake news” stories. In Bakersfield, that message will be delivered by KBAK.
It can't be a coincidence that the term "fake news" entered the popular lexicon at about the time Donald Trump became a serious contender for the White House. 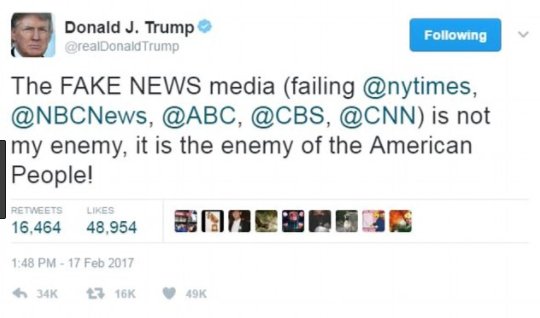 A Washington Post analysis of Sinclair’s 2016 presidential election coverage found that its stations were uniformly favorable toward Trump and negative toward Hillary Clinton. One example from The Post's evidence: Sinclair conducted not a single interview with Clinton during the campaign, but boasted of its 15 "exclusive" ones with Trump. Most of those interviews aired in critical swing states in the final months of the election — and without the thorough fact-checking commentary the then-candidate generally seemed to require.
An early version of the script, leaked to CNN and reported by that network on March 7, went like this:
“The sharing of biased and false news has become all too common on social media. More alarming, national media outlets are publishing these same fake stories without checking facts first. Unfortunately, some members of the national media are using their platforms to push their own personal bias and agenda to control ‘exactly what people think’ ... This is extremely dangerous to our democracy.”
A later version of the script eliminated the word "national" from "national media."
Perlman, Briscoe, Murcia and Gonzales recorded their 90-second spots this past week, according to Teresa Burgess, vice president and general manager of KBAK/KBFX. She said their identical commentaries would start airing March 23.
Feel free to tell your favorite KBAK personalities what you think of their recorded spots, but be advised that all of Sinclair's local stations have been informed that “corporate will monitor the comments and send replies to your audience on your behalf,” according to CNN.
Burgess confirmed that will be the way viewers' comments are handled, but added that those comments will be shared with her anchors.
She also criticized the CNN story. "There are some basic things in there that are not true," she said, noting, too, that she had seen only one version of the Sinclair script — the one her anchors taped that excluded the word "national."
"Basically, what the statement does is call out the fact that we do have this issue with fake news, especially in social media, and (addresses) the concern that it creates (a disservice) for our viewers," Burgess said.
"I mean stories like Pizzagate or the fake stories that the pope endorsed President Trump. We're calling out unfactual content because it affects all members of the media in terms of credibility."
She's right about that. But the problem with a script that refers to "fake news" is that the term can describe two very different things.
It can describe the straight-up false stories that pop up in social media and on disreputable websites — such as the alleged pedophilia dungeon beneath a Washington, D.C., pizza joint, frequented by Hillary Clinton. In December 2016, an armed man burst into the restaurant so he could rescue the slave children imprisoned in the basement. No shots were fired and no dungeon discovered.
It can also describe the invariably factual stories that President Trump finds damaging or uncomfortable and then tries to discredit.
Alluding to both in the same statement conflates the two; now we've got trusted hometown celebrities warning us about journalists "using their platforms to push their own personal bias and agenda" by presenting readers/viewers with phony and occasionally bizarre stories we all can agree are fake. If journalists are willing to feed us patently false "fake news" stories, President Trump must correct when he calls their legitimate reporting "fake" too. Right?
Some anchors around the country privately told CNN that they are bothered by the parent company's requirement of participation in the scripted campaign. One anchor said it was "like a POW recording a message” to Americans back home.
But a KBAK employee I talked to said the script was not offensive in any sense.
"I don't personally see anything wrong with it," said the employee, who asked for anonymity. "There's nothing (in the script that) makes me feel like there's an agenda. It's speaking to what journalists want, and that is to (deliver) the best unbiased story that they can. I didn't see anything unfair."
Is it true that media outlets have published "fake stories (from social media) without checking facts first," as the Sinclair script alleges? It happens from time to time, no question. Competition among media organizations to be first, combined with an increasing deluge over the past few years of expertly composed, knowingly false stories, has created challenges.
“Reporters and editors have to be more careful than ever before," Margaret Sullivan, The New York Times’ public editor, wrote in a 2016 commentary. "As hoaxers get more sophisticated and more numerous, it’s extremely important to be skeptical and to use every verification method available before publication.”
But national media (and some local, too, including this column) have campaigned hard to educate news consumers about ways to discern legitimate, reliable news reports from the more dubious stuff. The ability and willingness to evaluate the legitimacy of a story is as essential for readers and viewers as it is for journalists.
One of the best ways to discern a message's truthfulness is to identify and vet the source. That practice would well serve local television viewers who, starting Friday, will be seeing some of their favorite on-air news personalities reading a statement that the public might otherwise assume represents the personally held beliefs of those newscasters.
The statement might in fact represent the beliefs of some of Sinclair's TV journalists, but we can never really be sure, can we? Who's going to step up and challenge the corporate monolith that signs everyone's check?
____________________________

You can read the article, and access the Sinclair commentary by clicking here.