From Nation of Change, we get 5 ways that the GOP's proposed budget harms American families ...

1. JOBS: The GOP focus is on more tax cuts for millionaires (as if they need more) and deregulation (as if deregulation leading up to 2008 didn't do enough).

2. HOUSING / FOOD ASSISTANCE: Budget cuts in food stamps and housing vouchers would kick millions of children, the elderly and disabled out on to the streets with no food or prospects of putting a roof over their heads.

3. HEALTH CARE: Apart from repealing Obamacare, which would deny millions of newly covered people health care, the GOP budget raises costs for Medicare recipients by forcing them into a voucher system that isn't tied to rising costs.

4. EDUCATION: At a time of rising tuition costs, the GOP budget proposal raises Pell Grant eligibility requirements for college students, and freezes the program at current levels. Head Start gets whacked too.

5. TAXES: If you're not one of the top 1 percent when it comes to wealth your taxes will increase. While they claim not to raise taxes on the middle class, the GOP budget lets tax cuts for the middle class expire.


So, this is what we have from the Republican budget:

A jobs bill with no jobs mentioned ...

Housing and food assistance cuts, from a party that claims Christian values ...

Eliminating Obamacare when it's already enrolled millions and helped to slow the growth in health care costs ...

Making college less affordable for those who need it the most ...

While the GOP doesn't technically raise your taxes, they still go up under the Republican's budget proposal because they let current tax cuts expire for the middle class.

All of this hurts America's middle class today, and well into the future. 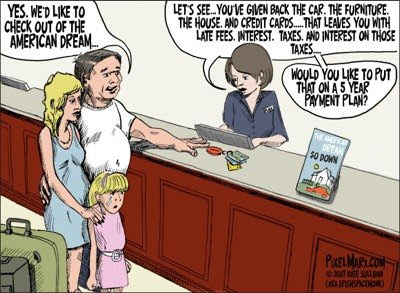 If you're wondering, the GOP budget proposal is actually part of a long history of going after the middle class, which explains why we end up with these "absurd contradictions of capitalism" today ...

* An astute reader commented that I needed to put  "proposed" somewhere in front of the GOP's budget. Fair enough, and done.
Posted by Mark A. Martinez at 11:16 AM