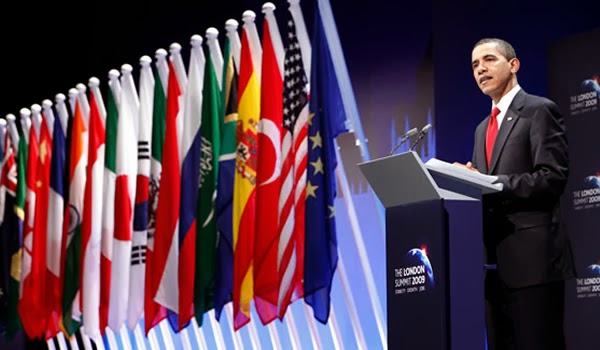 When President Obama entered the White House in 2009 he inherited a mess. The world was in economic turmoil, we were mired in two messy wars with no end in sight, and our relationships with the Middle East were unstable, at best. Osama bin Laden was still on the loose while Iran was an antagonizing enigma. The muscular foreign policy approach of the Bush administration showed the world that America had all the tools it needed to wage war, but it also showed the world that the American empire had feet of clay.

All of this would have been enough for any new president. But it was all made worse by a group of domestic political enemies who - if we're being honest - wanted President Obama to fail. They still do. Their vision of the world requires a military approach to virtually every issue they don't understand. 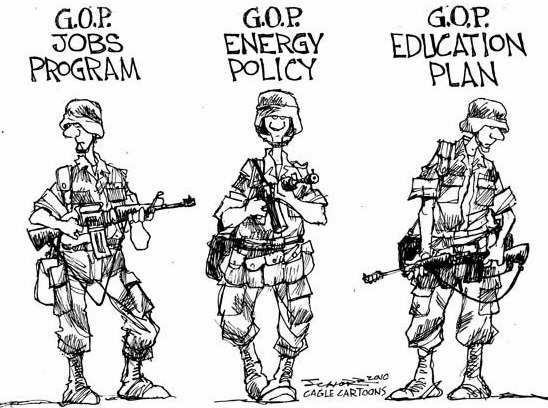 Their desire to militarize foreign policy issues while pushing endless war scenarios ignores one simple reality. The hard core neo-conservatives on the right who believe President Obama is doing it wrong have gotten virtually everything wrong about the world over the past 35 years. Think about the following conservative led developments.

* THE OMNIPOTENT SOVIETS: In the 1980s neo-conservatives like Dick Cheney were so consumed with the threat posed by the Soviet Union that they consistently misread reports telling us that the Soviets were on the verge of collapsing. They acknowledged Mikhail Gorbachev's reforms, but dismissed them as a ruse designed to catch us off guard. When the Soviet Union collapsed we were left flat footed, and bungled the post-Soviet world.

* A CULTURE OF MILITARISM: Chalmers Johnson discusses the rise of militarism in the United States. The key is understanding that our domestic security and military institutions have grown so large and powerful that they now put their institutional survival above our democratic structures. While bi-partisan defense budget increases have contributed to our growing culture of militarism, the reality is that neo-conservative military hawks have pushed a terror filled military agenda non-stop. In the process our security institutions have grown stronger, bolder, and less controllable while our domestic rights - especially with regards to the 1st and 4th amendments - have become diluted.

* MISREADING 9/11: Let's make this real simple. The events of 9/11 were carried out by a small band of thugs who don't represent a single religion, one group of people, or a single nation. We acted as if this was the case, and began a global war on terror that has cost us both financially and in terms of prestige. Instead of militarizing our nation, and criminalizing an entire group of people, we should have treated the perpetrators of 9/11 as war criminals. We did this with the Nazis, who actually posed a real threat to the world. Today Adolf Hitler is no martyr, while there are no statues and even less sympathy for a pathetic band of thugs who set the world on fire. Militarizing our budgets and turning millions of Americans against an entire religion is something Osama bin Laden always wanted. It's something he also wanted the Muslim world to see. Today, we are still pursuing a seemingly endless War on Terror that has cost us dearly.


They got it wrong on the Soviet threat in the 1980s ... They fail Foreign Policy 101 when it comes to understanding cause and effect ... They have no clue how a culture of fear and how militarizing our budgets are affecting our nation ... And they completely misread how to respond to 9/11.

I bring all of this up because of recent events in the Middle East, and how the far right and the neo-conservative military hawks have been responding to these events. From outlandish claims about incompetence in Benghazi, to questions about the president's "inaction" in Lybia, Egypt and Syria, conservatives in Washington have let the world know that President Obama is not their kind of commander-in-chief.

What they really want is for the world to forget what happened the last time they were running the White House. 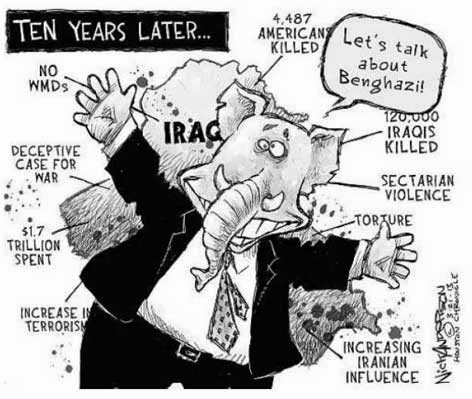 Today almost all conservatives (and several Democrats) are criticizing President Obama's agreement with Iran, which temporarily suspends their nuclear program. Senator John Cornyn (R-TX), the no. 2 Republican in the Senate, even went so far as to claim that President Obama came up with this agreement - which includes the threat of more sanctions, is easily reversible, and sunsets - to distract America from Obamacare.

Incredibly, there are even a handful of Republicans who are comparing this agreement to Neville Chamberlain's appeasement at Munich (once again demonstrating that many conservatives - who should know better - have no understanding of history, or simply have no idea what they're talking about).

At the end of the day, Egypt is on a new path, we avoided war in Syria, Iran is talking, we're pulling out of disastrous war in Iraq, and Afghanistan is a quagmire that we are talking about leaving. 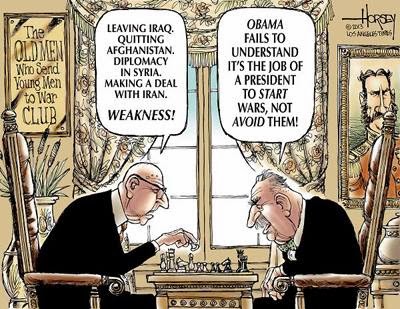 Given what President Obama was handed, and the GOP's long history of getting the world seriously wrong, I'd say President Obama needs to ignore the far right when it comes to places like Iran.

Better yet, President Obama should ignore virtually any suggestion that comes from the far right that has to do with national security. Seriously.

UPDATE: The last cartoon was added after I originally posted this.

UPDATE II: This post was edited and published in the Bakersfield Californian, which you can find here.
Posted by Mark A. Martinez at 6:25 AM