WELFARE VS. FULL TIME JOBS ... FOX NEWS AT IT, AGAIN

In their never-ending attempt to turn America against those on the lower rung of our economic ladder here's an incredibly misleading chart presented by Fox News on one of their October 28, 2013 segments ... 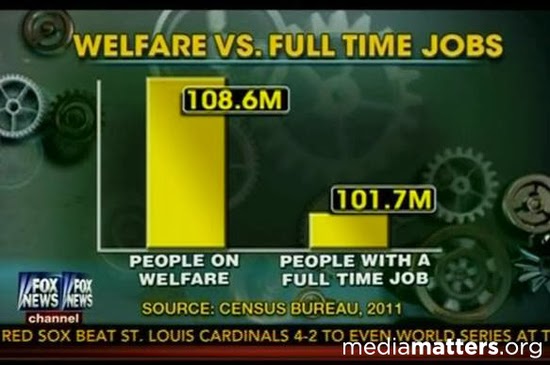 Can you figure out why this chart is misleading?

Think about it for a moment. It's not just the scale in the visual (though that's a problem too).

OK, here's the story behind the story (and the chart).

But wait. It gets better.

Because of the way "households" are counted by the Census Bureau if you happen to live with a child who is getting a reduced price lunch or a reduced price breakfast not only is the kid "on welfare" but so are you.

If you are living in a household where a disabled adult is receiving social security (20.3 million) you are also on welfare, even if you have a full time job.

If you're working but moved in to help an elderly relative or friend who needs help from the state with their electric bill or with housing (or is on Medicaid) you're counted as someone who is on welfare.

Fox News doesn't discuss or present any of this information.

Then we have the fact that 76% of food stamp (SNAP) recipient households include a child, an elderly person, or a disabled person. No one expects anyone listed in this group to work, but Fox doesn't mention this. You would think that this is important, especially since those counted in this group (about 49 million people) receive 83% of all SNAP benefits.

Then we have the actual number of workers in America in 2013.

The Bureau of Labor Statistics (BLS) in 2013 has over 141 million full- and part-time workers listed. Over 18 million of these workers are listed as part-time. Do the math. Fox decided to ignore this, and reported on what was presented in 2011 ... even though it's 2013.

Then there's the false dichotomy that Fox presents.

The unfortunate reality is that many full time workers are eligible for assistance because they earn a minimum wage that does not pay them enough to subsist. They need help to live. Working does not preclude the need for help. Fox fails to mention this. They would rather have you believe that people either work or they get aid. This is a false dichotomy.

This game playing along with their failure to mention that the elderly, the disabled, and children are the largest number of recipients of aid is a significant lapse in judgment. If we're being blunt, it's also unethical.

But let's admit it. Most of us have come to expect crap like this from Fox. 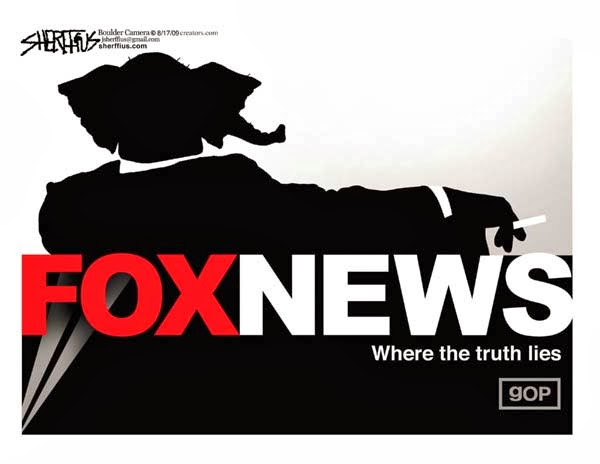 At the end of the day, the Fox chart is misleading because the people at Fox know that their viewers need to be lied to. It's the only way that the world they want to see becomes real. It's comfort food for those who are intellectually lazy and for those who want to point fingers while bemoaning the "collapse" of America.

The Founding Fathers understood that a well educated and informed society was the key to a successful and vibrant republic. What Fox viewers fail to see is how their ignorance and gullibility on issues like this are the real cancer contributing to America's race to the bottom.

Not surprisingly, it's also this condition that keeps them tuning into Fox.

Hi Mark, You did a great analytical assessment on Welfare vs Full Time jobs. The chart and the information you discussed is highly valued I do believe and disclosed each point very brilliantly. I appreciate your work and surely thanks for sharing for us.
여우알바 유흥알바

Really a great post. Very informative and interesting. I want to thank you for your good work. Will visit again. 유흥알바