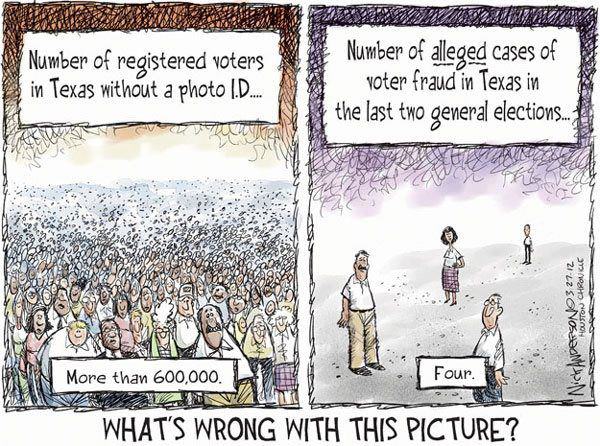 Vote rigging and buying votes has always been a concern for democracies around the world. The human condition is such that gaining and denying access to power does strange things to people. This is why Republican led attempt to suppress the vote by claiming electoral fraud, and then calling for very specific voter ID cards (especially in the South), has become one of the key electoral issues of our day. While you stand a better chance of being hit by lightening than uncovering a case of voter fraud (it accounts for a paltry .0004 - .0007 percent of voting activity) the GOP also understand that about 5 million voters (mainly people of color, students, and seniors) would be adversely impacted by voter ID laws. This op-ed piece on voter ID laws shines a light on what Republicans are really up to. Simply put, it's voter suppression. This appeared in our local paper, the Bakersfield Californian, and was written by my good friend Milt Younger. Graphs are added.
***********************************

The "wake-up call" for me came in March. Before then, I wasn't paying a lot of attention to the move sweeping state legislatures across the country to pass laws restricting Americans' right to vote. I had just skimmed the top of news stories that reported "photo ID" was being required to vote.
What's the big deal? Doesn't everyone have a "photo ID"? Well, apparently not. And in some states, the photo ID that is required has to be just the "right type" of photo ID.
But George Carroll of Aurora, Ohio, caught my attention in March, sounding the warning that one of Americans' most cherished rights is being threatened.
Carroll is an 86-year-old World War II veteran who has lived in the same Ohio town for four decades. He has run his own business, Carroll Tire, since 1975.
Carroll is in declining health and unable to drive. He had a driver's license, but he allowed it to expire in January.
Carroll was driven to the polls to vote in the Ohio state primary election in March. He showed his VA medical identification card, which included his photo, to a poll worker, who rejected the ID because it did not include Carroll's address. The poll worker also rejected Carroll's expired driver's license. For voting purposes, IDs must be "valid," not expired. Incredibly, it made no difference that Carroll knew some of the poll workers, who could vouch for him.
The poll worker offered to let Carroll vote "provisionally," with Carroll's ballot being counted only after his right to vote was verified days later. By then, Carroll was exhausted and exasperated. He left the polls without voting.
"My beef is that I had to pay a driver to take me up there because I don't walk so well and have to use this cane and now I can't even vote," Carroll told reporters. "I had to stop driving, but I got the photo ID from the Veterans Affairs instead, just a month or so ago. You would think that would count for something. I went to war for this country, but now I can't vote in this country."
Increasingly restrictive voting laws -- many being passed in Southern states that spent a century denying blacks the right to vote -- are being hurriedly passed in advance of the November presidential election. 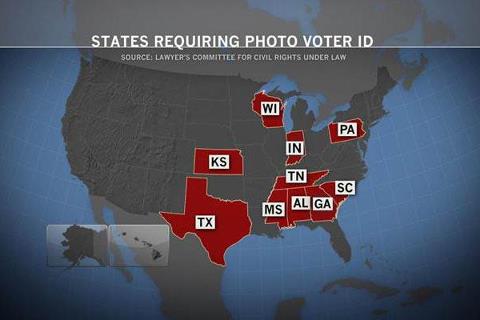 Proponents contend the goal is to fight "rampant" voter fraud. The problem is that there is no evidence of "rampant" voter fraud. Politicians are just targeting an imaginary problem with the "solution" being to prevent eligible voters from voting. The goal really is to influence election results.
The Brennan Center for Justice at New York University reports that 25 percent of African-American voters do not have a valid government-issued photo ID, compared with 8 percent of whites. The center also found that 15 percent of voters earning less than $35,000 per year and 18 percent of young voters do not have such an ID. 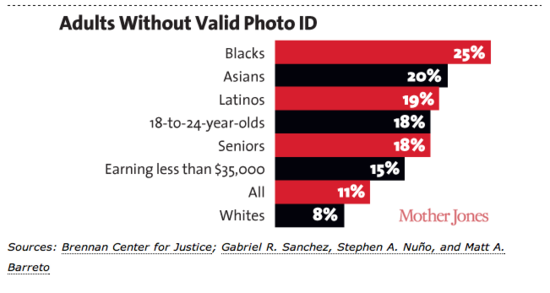 Because women traditionally change their names when they marry or divorce, the Brennan Center reported than only 48 percent of women nationwide have access to birth certificates with their current legal name and only 66 percent have proof of citizenship with their current legal name. This makes it difficult for them to acquire the ID required for voting.
Viviette Applewhite, 93, is the lead plaintiff in a lawsuit filed in May challenging Pennsylvania's new voter ID law. The Philadelphia woman is a former wartime "Rosie the Riveter" and civil rights worker, who marched with the Rev. Martin Luther King Jr. in Georgia in the 1960s in the fight for black voting rights.
Although Applewhite says she has voted since 1960, when she cast her ballot for John F. Kennedy, the law Republican Gov. Tom Corbett signed in March requires her now to produce a photo ID, such as a driver's license, to vote.
Confined to a wheelchair, Applewhite does not drive. She does not have a driver's license. To obtain a free government photo ID, Applewhite must produce her birth certificate, which the state can't seem to locate. Other forms of photo ID were lost when Applewhite's purse was stolen.
Applewhite is one of 10 plaintiffs in the lawsuit. Among the others are three elderly women who say they cannot obtain necessary IDs because they were born during the Jim Crow era in the South, where states have no records of their birth.
And then we have the state of Florida, where elections officials have teamed up with the Florida Department of Highway Safety and Motor Vehicles to ferret out "illegal voters."
The results, so far, have been reminiscent of the 2000 Florida debacle, where a company hired by the state mistakenly identified thousands of voters as "felons" and kicked them off the voting rolls. Many of these "felons" were law-abiding citizens. Embarrassingly for the state, some were even prominent citizens.
The newest scheme, where motor vehicle files are checked to determine citizenship, is yielding hundreds of "suspicious" voters. Maria Ginorio of Miami is one of them.
Ginorio is an immigrant from Cuba who became a U.S. citizen in 2009. Florida driver's licenses are issued for eight years. Ginorio obtained her license before she became a citizen.
In order to preserve her right to vote, Ginorio will have to go to the state's Division of Elections to document her status as an American citizen. But that's not possible. Ginorio is ill and homebound. Until this year, she has voted by absentee ballot.
"I'm not going to do anything about this," Ginorio told reporters. "I can't. I guess I won't vote anymore. I say this with pain in my heart, because voting is my right as a citizen." 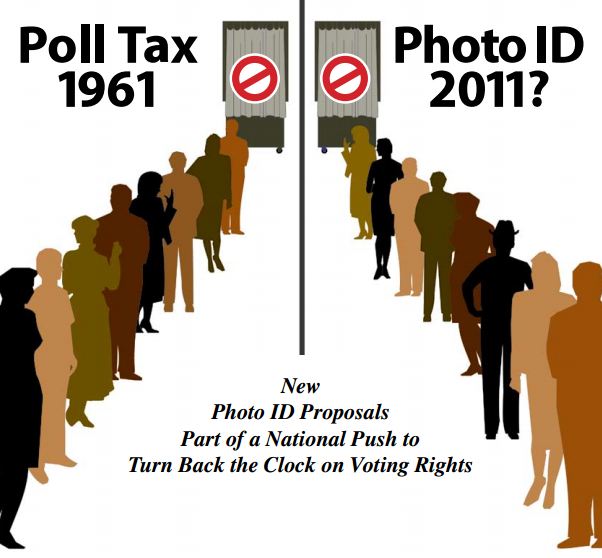 These are just a few of the documented stories of Americans who are being deprived of their rights to vote because state legislatures are limiting access to the electoral process. Some of the rules might make sense, while others can't pass as "common sense." Consider Texas, where a law change axed many traditionally used documents from the ID requirement, but added a license to carry a concealed handgun to the "accepted" list.
The Beat Obama Committee, a political action committee registered with the Federal Elections Commission, has launched a fax campaign to urge Congress to pass a nationwide voter photo ID requirement. The committee's name leaves little doubt as to its motivation.
But a "national standard" that is written correctly just might do more to protect voting rights than to suppress them. No one denies the need to maintain the integrity of voting and assure only citizens are casting their votes. But the criteria used to do that must be fair and not aimed at denying the vote to minorities, women and young people in order to "game" the political system.
Milt Younger of Bakersfield is a longtime personal injury attorney and U.S. Army veteran.
***********************************