Why isn't the Tea Party all over this?

Via former regulator, Bill Black, we get this story of Bank of America directing one arm of it's company - Merrill Lynch - to transfer some it's most toxic crap (derivatives) to Bank of America. Why in the world would Bank of America want one of its subsidiaries to shift their toxic assets on to its books you ask? It's actually very simple.

The account where Merrill Lynch held its toxic assets wasn't federally taxpayer insured. The Bank of America account they shifted their toxic crap to happens to be insured by the Federal Deposit Insurance Corporation (FDIC) United States taxpayer. So if the toxic crap flounders and eventually tanks the U.S. taxpayer is on the hook, again.

Got that? The American taxpayer is getting set up to pay for Bank of America's stink, again. But wait. It gets better.

Bank of America actually started doing stuff like this when they began dumping their delinquent ("Noncurrent") debt contracts onto the federal government American taxpayer ("GovGuar") back in 2009. In fact, they went from having a little over 2 1/2 percent ("Perc") of their delinquent debts covered by government guarantees to over 20 percent covered by the government in less than 3 months. Check this out ...

For the record - and for those of you who don't remember - Bank of America received a $45 billion bailout during the financial crisis. But they also just posted a $6.2 billion quarterly profit, just 22 months after crowing about paying back their bailout money.

My question is this: If Bank of America is so healthy why does the American taxpayer have to backstop their toxic crap? I mean, part of the reason for "paying back" their bailout loan was because they were healthy, right? (actually they paid back the loans early so they could pay out bonuses, meaning it was all smoke & mirrors, rather than financial health driving the pay back; but that's another story) Instead, they're acting like Zombie Banks, surviving off the flesh of the American taxpayer. 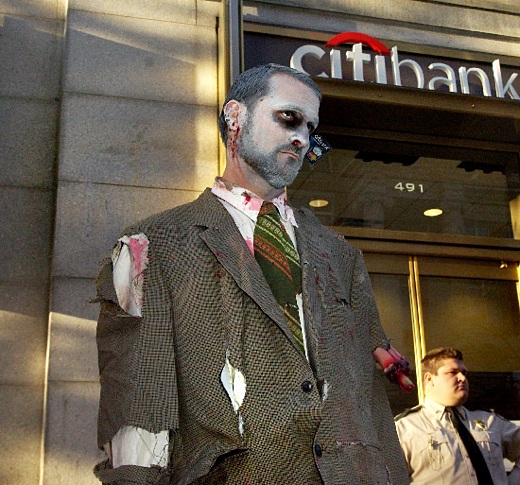 This is why the Tea Party is really a right wing joke. It has always been a front for deepening the GOP's tax cut-deregulation talking points. And the Occupy Wall Street movement is (or should be) helping to make sure more Americans understand this point.

UPDATE: It turns out that the total amount of derivatives in the FDIC-insured portion of B of A as of mid-year was $53.7 trillion, up 10 percent from $48.9 trillion the prior year. This is up nearly 35 percent from its pre-fall crisis level of $40 trillion (the Merrill Lynch securities division holds $22 trillion in addition.)
Posted by Mark A. Martinez at 11:01 AM