In my Introduction to American Politics class I assigned this book, Bailout Nation, by Barry Ritholtz. 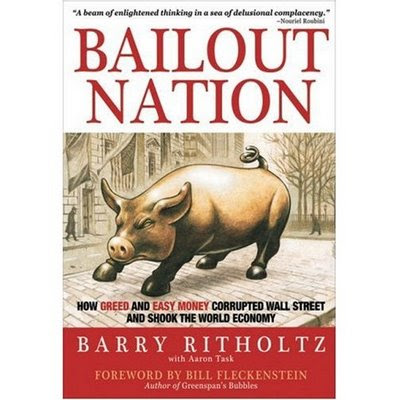 In his book Ritholtz argues that not only are Wall Street's biggest market players accustomed to letting the U.S. government pay for their mistakes, but that they have been banking (literally) on the Federal Reserve propping up asset prices. Put another way, the federal government both bails out market stupidity and guards the accumulated wealth of those who already have lots of it.

The primary culprits here are Alan Greenspan and, today, Ben Bernanke and Tim Geithner. Their crime? Manipulating interest rates which helps pump money into Wall Street. The end result is that market players - and their media sycophants - believe things are better than they really are. Today, estimates of how much we've committed to Wall Street bankers and financiers sits around $14 trillion.

This is more than our current national debt. And it's far more than we've spent on other projects (even accounting for inflation adjustments) that actually contributed something to our nation.

How bad are things? Here's what Thomas Jefferson said would happen if we let what's happening now - the bankers taking control of government policy - were to occur:

“I believe that banking institutions are more dangerous to our liberties than standing armies. If the American people ever allow private banks to control the issue of their currency, first by inflation, then by deflation, the banks and corporations that will grow up around [the banks] will deprive the people of all property until their children wake-up homeless on the continent their fathers conquered. The issuing power should be taken from the banks and restored to the people, to whom it properly belongs.”

There's more to this. But, for now, take a look at what Ron Paul has to say about why the Federal Reserve is fighting audits by Congress. I don't always agree with Paul's politics, but his take on the economics is usually spot on. Check out what he has to say here. Here's the money quote:

Under the guise of currency control, they are able to help out powerful allies on Wall Street, in exchange for lucrative jobs or who-knows-what favors later on. An audit would expose the Fed as a massive fraud perpetrated on this country, enriching a privileged few bankers at the top of our economic food chain, and leaving the rest of us with massively devalued dollars which we are forced to use by law. An audit would make people realize that, while Bernie Madoff defrauded a lot of investors for a lot of money, the Fed has defrauded every one of us by destroying the value of our money. An honest and full accounting of how the money system really works in this country would mean there is not much of a chance the American people would stand for it anymore.

I'll have more to say about this later.