SO, WHAT'S GLASS-STEAGALL ALL ABOUT?

Senators Elizabeth Warren (D-MA) and John McCain (R-AZ) have introduced legislation to bring back the Glass-Steagall Act, which would be a big first step in reigning in the excesses of the financial sector. Below is the story behind the legislation that they're trying to revive ... 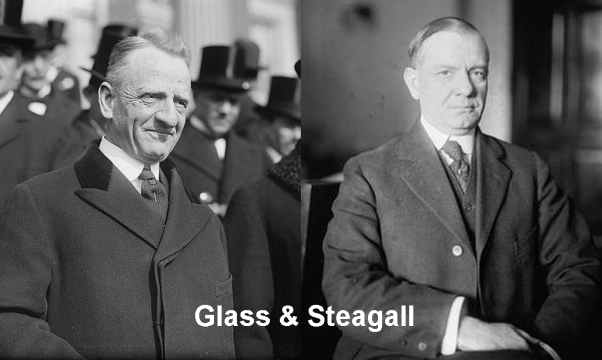 But wait, it gets better (or is that worse?).

As long as the market kept going up the investment bankers saw handsome returns - which they famously did not share with the customers whose accounts backstopped their market bets.

Then, in 1929, everything went south. The stock market crashed on the nonsense that had floated it for years. Panic hit and many bank depositors lost everything. Almost 5,000 banks would shut their doors. 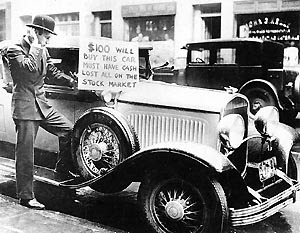 To prevent this from happening again the U.S. Congress came up with a plan. The Glass-Steagall Act (also known as the Banking Act) was passed in 1933. Apart from creating government backed depositor insurance (FDIC) it also outlawed commercial banks from doing what investment banks do and prohibited commercial banks, insurance companies, and investment banks from operating under the same roof.

There would be no more serendipitous movements of money from one institution to another.

To be sure, Glass-Steagall didn't prevent Wall Street from gambling with its clients' money (see here and here). But it did protect the little guy on Main Street from Wall Street, and Wall Street wannabes, who used their accounts to backstop their market bets. 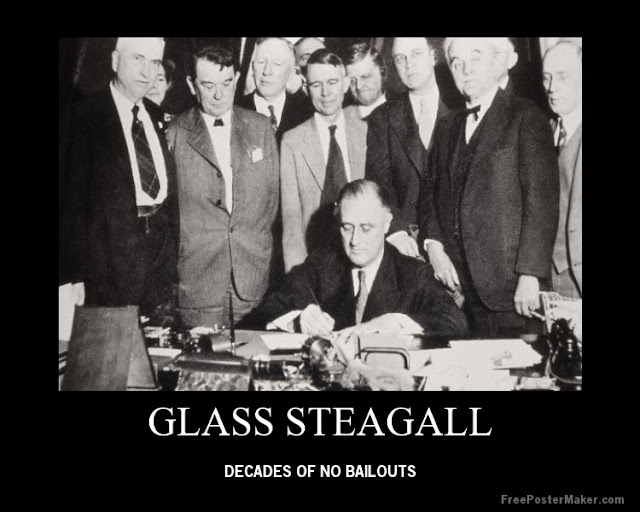 The best part of these developments was that "market collapse" and "government bailout" were effectively erased from America's economic language for the better part of 50 years.

In spite of the fact that Glass-Steagall and other regulations had stabilized our economy and protected the little guy on Main Street the financial sector got restless.

Prodded by political developments in the 1980s deregulation became the norm. After sufficiently diluting Glass-Steagall with pin prick legislation throughout the 1980s and 1990s the financial industry decided that they needed to neuter Glass-Steagall once and for all. They got the U.S. Congress to effectively repeal Glass-Steagall with the Financial Services Modernization Act (also known as the Gramm-Leach-Bliley Act). President Clinton signed it into law in 1999.

Visit NBCNews.com for breaking news, world news, and news about the economy


And just like that, after 50-plus years of relative economic stability, the small bailouts that emerged with reckless deregulation in the 1980s and 1990s turned into the monster 2008 market collapse. Incredibly, there was one U.S. Senator, Byron Dorgan (D-ND), who saw it coming in 1999 ...


There's little doubt that Senators Warren and McCain's legislation will not be enough to reign in the stupidity that we see in the marketplace today (it has little chance of passing). But it would help banks focus on boring loans for small businesses, homes, and infrastructure projects rather than pursuing risky investments in derivatives, collateralized debt obligations, and credit default swaps. 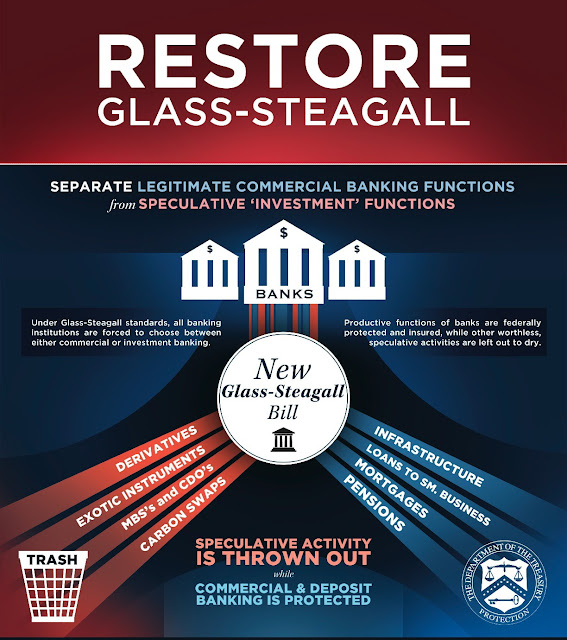 There's much more to do, which includes walking back some of the reckless borrowing and deregulation that was passed in the 1980s and 1990s.

But the Warren-McCain legislation is a start.

IN THE FYI CATEGORY: Fair's fair. Here's the American Enterprise Institute's "Five Myths About Glass-Steagall." It focuses on trying to shift blame for the 2008 market collapse to the government (who else?), but is not particularly convincing, or well argued. Here's why ...

#1 is misleading (at best) because it emphasizes underwriting rather than pooled resources and shared obligations ... # 2 says nothing about the bogus collateral behind the traded assets ... # 3 really says that trading toxic crap is not the problem, it's getting stuck with the toxic asset that is ... #4 is more opinion (and a wrong one at that) than fact ... #5 misses the point (ignores?) the role of our shadow banking system and how deregulation allowed anyone who could fog a mirror to get a loan.

For a better understanding of the market collapse click here, here, and here.


P.S. Kudos to those who wrote and asked me to write about Glass-Steagall. When I get more than a couple of requests I make an extra effort to respond ;-)
Posted by Mark A. Martinez at 8:22 AM