So everyone knows that the economy and stock market was in a death spiral at the beginning of 2009, right? Then Congress and the Federal Reserve came to the rescue and pumped trillions back into the economy with bail out cash and other guarantees for market players.

Check out what pumping trillions of dollars into the economy (with TARP, the stimulus, and regular money dumps) has done for the S&P 500 over the past four years ... 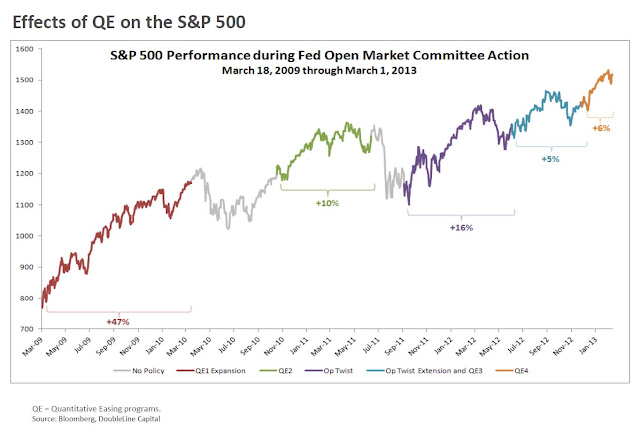 What we learn here is that after more than 1,230 days of market interventions by Congress and the Federal Reserve (what market players like to call "quantitative easing") the S&P 500 has soared to record highs, again.

Now that's the magic of the market at work for you [wink, wink] ...

And it's done wonders over the past 30 years to bloat profits and help insulate Wall Street from their own recklessness and stupidity. Check out what's been happening with the Dow Jones Industrial Average since Alan Greenspan hit the scene ...

So, yeah, in just 25 years since the arrival of Alan Greenspan the DJIA has gone from hovering around 2,000 in the late 1980s to over 14,000 today. With these type of money dump guarantees a monkey picking stocks with darts could have made money in our market over the past 25 years.

Again, that's the magic of the market at work for you ...

But this isn't the end of the story. After making so much (cheap) money available to corporate America the Federal Reserve has watched over a system that has seen the size of our money (dollar) supply grow like the Octomom after fertility treatments. Check it out ... 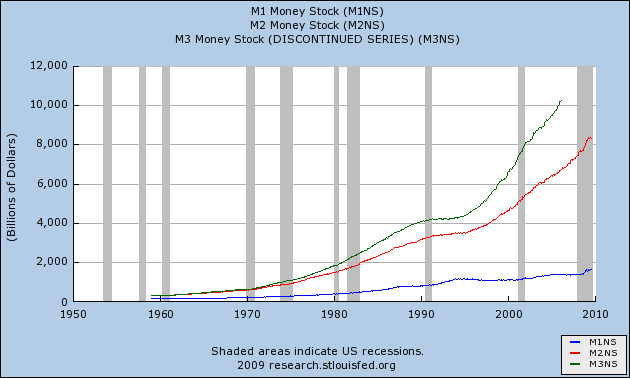 In real simple terms M-1 (blue line) represents the amount of money Main Streeters (you and me) have in our collective pockets and checking accounts. By 2010 this was about $1.8 trillion. M-3 (green line) represents the amount of money Wall Street and corporate America's biggest financial players have to spend, or have a claim on. By 2006 this amounted to roughly $10.29 trillion (over the past 7 years M-3 has hovered between $13 trillion to $15 trillion).

Here's what the increase in the money supply looks like since the Fed really started pumping money into the system immediately after the 2008 market collapse ... 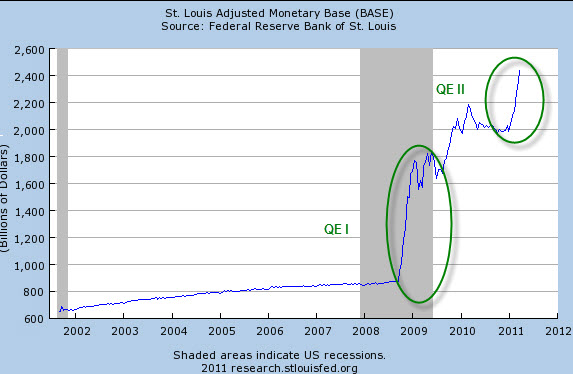 So, just what has all of these Fed-led market interventions meant for corporate America? 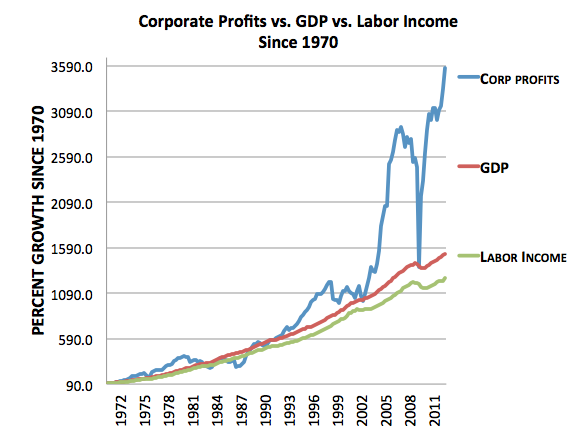 The unsettling part here is that profits are growing at a rate that far outpaces what we produce (GDP) every year nationally (this is what Peter Drucker was talking about more than 25 years ago when he discussed how the real economy was increasingly being separated or decoupled from the "symbolic" economy ).

If you've read this far, and understand this stuff, then you should be ready for the next level. So I have a recommendation. Check out how printing money by the Federal Reserve actually works ...

To be sure, there are a few areas in the clip that I don't agree with, but the concept is clear. We're doing it wrong, on so many levels.

At the end of the day, after dumping trillions of dollars into the economy, the market jubilation we're seeing on Wall Street is really nothing to get excited about ... that is, unless you're one of the big corporate money players in America.

Spot on. Yet, this easy money is not enough for the financial criminals. An ex-Goldmanite (Jim Himes) has introduced a bill (H.R. 992) that will allow banks’ derivatives positions to be moved into accounts that are FDIC insured. This could very well set us up for another taxpayer shakedown via FDIC when the banks implode again. http://www.nakedcapitalism.com/2013/03/when-you-werent-looking-democrat-bank-stooges-launch-bills-to-permit-bailouts-deregulate-derivatives.html

I remember sitting through finance classes in the early 1990s. Profit maximization was the mantra. Some of the instructors repeated the mantra so often a person was to be forgiven for genuflecting each time it was proclaimed. I became so disguised with the whole propaganda routine that I switched majors and obtained my degree in sociology. At least people are still viewed as people within the discipline as it was taught by the instructors, not as inputs fulfilling a goal of profit maximization for a few elites. I took the long-term view and reasoned that there would be incredible demand for anyone who knew how and wanted to help people (those outside the elite circle) when the resulting carnage of the profit maximization ethos materialized.

Should be disgusted rather than disguised.