This helps explain why Fox News is a joke ...

They take a simple unsubstantiated assumption, and then claim "most economists" think tax cuts for the rich are an effective way for stimulating the economy ... because, you know, they worked out so well for George W. Bush.

In reality, as I've pointed out before, Republicans seem hell bent on supporting the wealth of the Paris Hilton's of America, even if it doesn't make economic sense for the nation.

If Fox News bothered to do a little homework they would have found a January report from the Congressional Budget Office (CBO), which is respected on budgetary matters by both political parties. The CBO studied how various policy measures would affect growth and employment across the nation. They found "that putting money in the hands of lower-income earners by boosting aid to the unemployed or lowering payroll taxes is a significantly more efficient way to stimulate growth."

This is especially the case when "compared to putting more funds in the hands of those already well-off."

In order to understand why, let's consider what happens to the economy when America pursues two distinct policy options in the short term:

TAX CUTS FOR THE MIDDLE CLASS: Every time the federal government cuts taxes for the middle class, or otherwise transfers $1.00 to you and me (or the states), the policy generates between eighty cents to $2.20 worth of economic activity. Merchants benefit, communities benefit, states benefit. Again, $1.00 in tax cuts for the middle class and government transfer payments get us about this much ...

TAX CUTS FOR THE RICH: If the federal government continues to follow the policies of George W. Bush, and maintains tax cuts for the rich, it will generate between ten cents and fifty cents in economic activity. Yeah, that's right. We actually lose economic activity (as the rich pad portfolios and/or bet on derivative products). But the Paris Hilton's of our nation do quite well, as do our bailed out Wall Street bankers. Again, for every $1.00 in tax cuts we grant to our Wall Street buddies and the Paris Hilton's of our nation we get this ...

In a few words, in the current environment we're flushing our money down a rat hole by cutting taxes for the rich. Worse, we're generating more budget deficits. How do we know this? Because the CBO has been crunching the numbers and this is what they've told us we get in return for every dollar spent ... 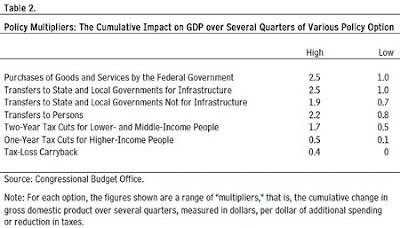 It's really pretty simple. President Obama and the Democrats want to transfer money by maintaining tax cuts for ordinary Americans hit hard by Wall Street's stupidity and greed. The big payoff is that it will generate more bang for the buck. The Republicans, however, are holding out for more tax cuts for the rich because, as Sen. Mitch McConnell (R-KY) argued on the Senate floor, the rich have been hit the hardest by this recession (seriously, check out the video).

Ignored by McConnell is how the GOP's failed "tax cuts for the rich" ideology has consistently given us more debt, which you and I have to pay for.

But let's not let the facts get in the way of Fox News' disinformation party ... and a group of people who want nothing more than to see President Obama fail.