POVERTY UP, INCOME DOWN (and other "good" news)

George Bush not only handed President Obama an economy that is in shambles, but his reckless policies helped destroy and turn back the economic gains that President Clinton left him (which includes blowing through projected trillion dollar surpluses; but that's another story). According to the Census Bureau, as reported by the NY Times' David Leonhardt:

According to Leonhardt, "there has never before been a full decade in which median income failed to rise." 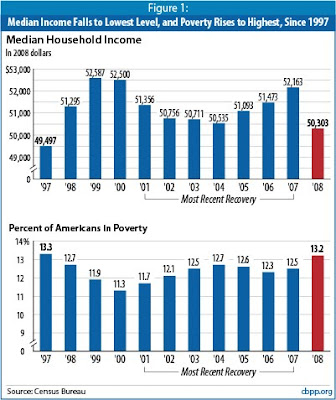 If you can imagine it, things could actually be worse. According to economist (and periodic guest on our program) Mark Thoma, "Without public insurance programs and the stimulus package, the news would be even worse."

Any way you look at it we're in trouble. The numbers are telling us that not only is the American consumer carrying more debt than ever, but we're losing the earning capacity to help revive this economy (on a personal note, my income was cut 10% this year). This helps explain, in part, why I've been arguing for some time now that this recession is far from over. In fact, I think we're looking at at least five years (minimum) for recovery. That is, if the financial sector doesn't screw things up again.

P.S. In the FYI category, during the Bush years child poverty rates went up ... 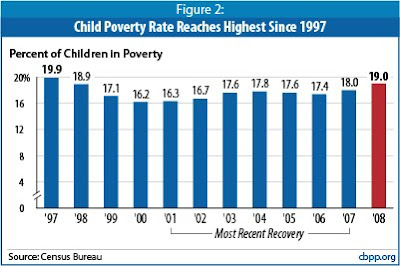 ... while the number of non-elderly who have no insurance rose to 46.3 million.