Here we go again. I just received this from the "send-us-your-money" investment team sponsored by Newsmax.com. In their overly hyped solicitation piece, "FORGET ABOUT SOCIAL SECURITY!", Newsmax does it's level best to scare the hell out of it's readers (with big, spooky looking font) by bringing back the old "social security is going bankrupt" canard.

As I pointed out several years ago, social security is not in crisis. What's in crisis is a morally bankrupt Wall Street and DC crowd that seems bent on putting ideology and their own interests above the good of the country. Back when President Bush was in charge, Wall Street convinced the president that their interests were America's interests. This explains why President Bush pushed for the privatization of social security immediately after his second term began.

Can you imagine how you would have felt in 2008 after the market collapsed, and waking up to realize that there no longer was a social security program because everything had been dumped into Wall Street? The big financial players on Wall Street would have - as we have seen - kept their bonuses and fees (for doing such a bang up job protecting your money). We, on the other hand, would have been left holding the bag (a much bigger bag, that is).

More specifically, we would have been left hoping and praying Washington bailed out Wall Street so we would get something out of the system. Taxes would have to be raised to pay for what we've already paid for, but this time you and I would be fighting Washington AND Wall Street to get some kind of justice. In effect, we would have paid twice. First by dumping the money into Wall Street. Second, to recoup the losses that were sustained on the back of our retirement.

See how that works?

Today, we have Wall Street stooges, like Congressman Paul Ryan, pushing the same fiction about the need to privatize social security because of the financial challenges Social Security faces (Ryan threw what Paul Krugman called a "hissy fit" when his lies were exposed). In fact, as I noted five years ago, social security is not in trouble if we do three things:

1) Rescind Bush’s tax cuts for the rich. This would add approximately $1.8 trillion to government coffers over the next ten years.


But the investment gurus of America (like those promoted by Newsmax) aren't interested in letting you know about these policy options. They would rather scare you about looming Social Security bankruptcy, then get you excited over their "privileged" market information, and then hope you will forget how Wall Street almost bankrupted America a year and a half ago.

If all goes well - for Wall Street - you would become another Tea Bagging foot soldier, diligently sending your money to their way (I'm not sure if Wall Street sends you a hat). 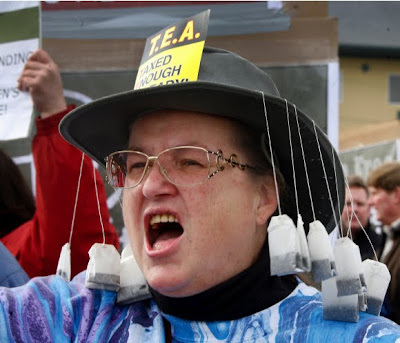 Here's what's wrong with this scenario. Market newsletters, like from Newsmax, are private investment solicitations. They publish their "experts" advice, but fail to note that many those contributors famously didn't see the 2008 market collapse coming.

To be sure, they did voice concerns and lukewarm predictions from time to time during 2008 (I read them), but these posts were essentially buried by the "invest-with-us-or-lose-your-wealth" death tone of their newsletters. That is, right up until the market collapsed in September. Then market players made claims about how well things would turn out if we just let the market work, and invested with them, again.

What these guys are really after is your money. So pay attention when you see "SOCIAL SECURITY GOING BANKRUPT" from the Wall Street "professionals." These are the same people who think we don't need rules for Wall Street, but then have no problem sticking their hand into your tax paying pocket when things go wrong (you know, privatized the profits, socialize the losses).