In my previous post I pointed out why I like to read Money Morning, one of the many investment newsletters that I regularly receive. In this post you'll see why I try and read as many of these newsletters as I can. In a few words, much of what comes from the "experts" is not worth the cyberspace it's floating on. Yet it passes as viable market insight, or analysis.

I encourage you to read this piece on risk aversion and wave theory, which I've also posted below. I want you to read it for one reason, and one reason only: To see how technical writing, bathed in enough market-speak, can make just about anyone sound informed. The author is explaining (or trying to explain) how "the roadmap to sustainable recovery has three waves" centered around (1) panic & market collapse, (2) stabilization, and (3) confidence & recovery. My comments on the nonsense follow below.

... Over the past months I've written extensively in my Money and Markets columns about the bubbling over of the risk trade. I also warned about the rising threats that would likely make a sustainable recovery, at this point, a low probability.

And as time passes, we're beginning to see that these threats, including a growing sovereign debt crisis, rising protectionism, and threatening asset bubbles, are becoming ripe and dangerous.

But in a world of instant information, it's easy for our focus to be drawn away from the underlying fundamental problems in the world economy ...

It can be difficult to see the forest for the trees when stock markets are rising, commodity prices are recovering and the media is touting hot burgeoning world economies.

But if you step back and examine the activities in the global economy and the global financial markets over the past 2½ years, based on history it looks like the roadmap to sustainable recovery has three waves. And we're likely only two-thirds of the way through the economic drawdown.

Wave number one was panic-induced, risk aversion. It was the unraveling of the credit bubble, the seizing of the financial system and the flight of capital from all corners of the world back toward the center (the United States).

Wave #2: Stabilization
The second wave was the eye of the storm. Here, risk appetite bounced back. Global central banks engaged the biggest experiment in history in an effort to stabilize a rapidly deteriorating financial system. In the process, they opened up the money spigot and flooded banks with capital, backstopped failing giants, guaranteed obligations, and printed trillions of dollars.

For many, this started looking more and more like the recovery phase. But in reality, it was nothing more than a retracement of the initial, panic-induced risk aversion trade.

Wave #3: Pain & Cleansing
The final wave is another bout with pain. This is where all of the underlying problems come home to roost. Ultimately the problems get faced and worked through, only after which a path to a sustainable economic expansion opens.

This phase is best described as the final leg of the risk aversion trade. This is where global investors, again, flee for safety as the uncertainty elevates surrounding the fallout from damaged economies and the ability of central banks to manage all of the aggressive policy responses.

Here, investors abandon the pursuit of return ON capital, in favor of return OF capital. And this is precisely what we're seeing now in response to the dominoes lining up with sovereign debt problems.


The author's comments on risk aversion and wave theory might make it appear that he has a broad, historical, understanding of markets. Just ride the waves out, is the advise. Broken down what he's really saying, and covering up, is that market panic caused by excessive greed and market stupidity is being soothed by trillion dollar bailouts and other market guarantees. This will ultimately be paid for by taxpayers and consumers in the form of higher taxes and more belt tightening (for the middle-class) ... and the game will go on. It's really that simple.

It's also a period that begins the healing of economies. And it's driven by austerity. This means increased taxes, higher savings and a lower standard of living. In short, it's a period of rebalancing and rebuilding.

The three-phase cycle I just described is nothing new. It follows a time-tested theory on the behavior of markets and human psychology called Elliott waves. This principle suggests that patterns in markets tend to form five-wave and three-wave structures.

Let me simplify this for you ...

A good proxy for global risk appetite has been the U.S. stock market. This is where global risk taking, or lack thereof, is among the most easily identified.

Got that? When people get scared they "panic" and don't take risks. A lack of confidence is contagious, which is why markets explode and collapse. Herd mentality, rather than market rationality rules the day. But wait. Don't worry, the author tells us. Things will smooth out at the end of the day, after the "pain and cleansing period" is "faced and worked through" by people (like you and me).

This kind of analysis is genius, I tell you, pure genius. You know, kind of like this ...

Look, it was John Maynard Keynes who pointed out what happens when markets collapse. But instead of blithely saying that markets pick up when people are no longer panicked Keynes looked at why panic subsides. He also looked at what really lies at the heart of capitalism. It wasn't things like gold, infrastructures, or human capital. It was confidence. And when confidence is missing? Time for the government to step in (there's more to this, but you get the point). 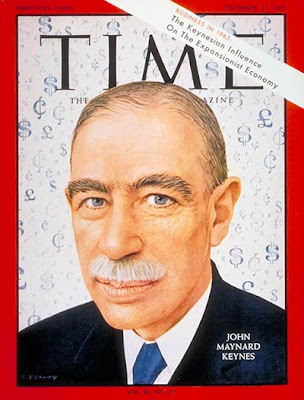 Keynes also had something else to say about making the simplistic observation that when "investors embrace risk, the stock market usually rises." Specifically, he wrote:

Economists set themselves too easy, to useless a task if in tempestuous seasons they can only tell us that when the storm is past the ocean is flat again.

At the end of the day, don't be mislead by market analysis that claims things that have already been said, and are said without the proper context. "Risk Aversion: The Final Wave" is one of the most empty pieces about what's happening in the market that I have read in some time. Seriously.

Because it wasted my time, it kind of ticked me off. Which is why I decided to post on it, and pass it on to you.